Who would've thought fire on land would be such a problem for sailors? Isn't that the point of a boat? Well, we seemed to have our own perfect storm on our hands during Day 4 of our trip. We weren't able to leave our marina on Day 3, since there were rough seas and no other places to moor the boat - everyone else was taking up spaces and hunkering down for the same storms.
All of that boredom and pent-up angst seemed to have gotten the better of two girls on our tiny island, who's idea of a good time was throwing cigarette butts into a forest of dried pine needs. Whoosh! And we're off: 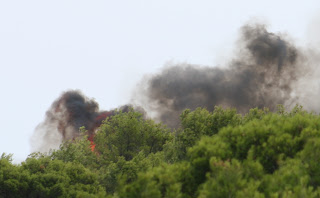 This tiny island was ill prepared for firefighting, though forest fires are a very big deal around Croatia. The water pump was setup, and everyone rushed to hook up the hose and start holding the fire back. Since everyone was understaffed, we left the boat and rushed to help out. This was a great primer for how hard it must be to be a first responder at a disaster - through in constantly translating from Croatian to English, and you've got yourself a disaster. 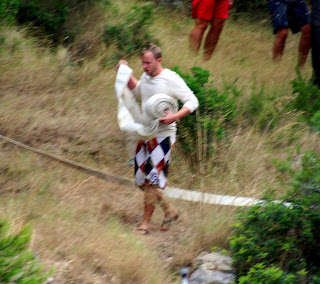 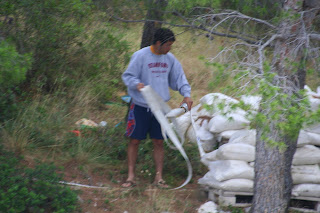 Which is just what they said. Though I'm pretty sure I heard one of the marina employees yell "Stop Drop and Roll", they did indeed have a plan b: two large fire-fighting seaplanes from the mainland. I was still in the forest manning the hose when the first plane came. Nobody told us that people have been killed when hit by the wall of falling water, so we just stood there, looking up, saying "Neat!" 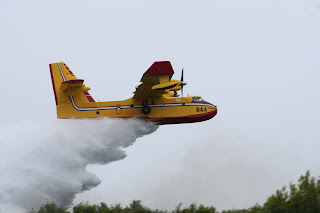 In the end, the planes did what our pitiful hose couldn't do, and the we didn't have to evacuate the marina (However, it didn't save me from trying to explain to Katie why I would go about jeopardizing our marriage with, you know, death) 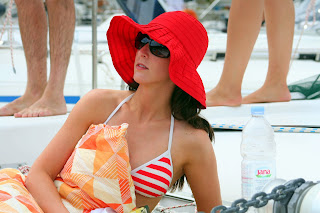 Amateur forest firefighting (a competitive sport in Croatia) was one of several Darwin awards narrowly avoided on this trip, but definitely the most exciting! The BBC even picked it up:
http://news.bbc.co.uk/2/hi/in_depth/7510782.stm
Posted by Katie Shaver at 12:22 AM