Today's post was supposed to be fantastic aerial views of Dubai.  Katie and I had taken advantage of a LivingSocial deal to get a helicopter tour of the city, and we were all excited to be zooming over man-made islands, coastline, and tall towers of glass and steel.  Alas, we were greeted with a really ugly day when we woke up: 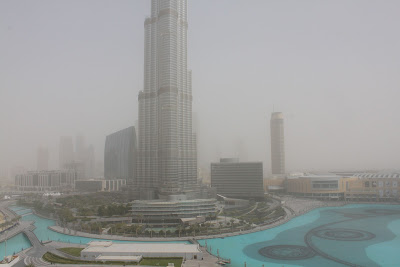 When we went to sleep, it was perfectly clear outside.  75 degrees, a few fluffy clouds, and even a calm sea breeze.   That just serves to show how quickly the weather can change around here.  Without the sandstorm that rolled in during the night, here's what the same picture would've looked like: 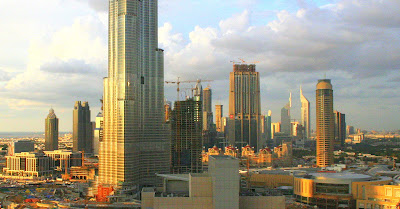 Oh, but that's not all, folks!  For the price of a single blog post, you get not one, but two misfortunes! 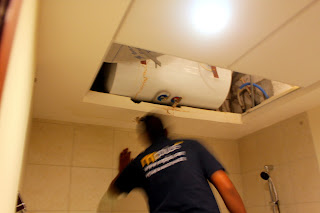 Also this week, we lost a dear close friend - Mr. Water Heater.  This knocked out water to the shower and the kitchen - not good, especially when my brother is coming to visit in just a few days.  I'm happy to report that a crew was happy to come out, rip out our ceiling, and detach the broker appliance from the ceiling.  THE CEILING.   Who mounts a large water heater to the ceiling? 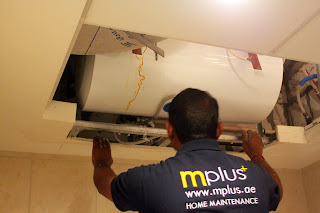 As it turns out, they had to re-drill and remount the new water heater in the ceiling, then send out another crew to replace the ceiling (which was falling apart due to water damage), repatch, and repaint.  At least they installed it over the tub, so as to catch all of the falling water and drywall.  Nice planning, chief.

Stay tuned for hopefully positive news - in the meantime, we're staying in to watch movies and avoid the sandstorm!
Posted by Matthew Mueller at 12:28 PM 1 comment: