Is That a Dairy Queen? Oh No It's Border Control! An Ice Cream Cone in Bosnia 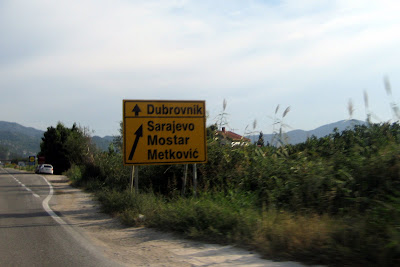 We had a great time on the meandering drive from Split to Dubrovnik, we listened to the radio, enjoyed the sights, and....then there was a slight shock that went something like this: Umm, what is that up ahead? A check point? What kind of check point? Do those guys have guns? Why! They don't look too friendly. Matt can you read the sign? It says "Welcome to Bosnia". Whoa! Did we take a wrong turn, because Bosnia wasn't part of the itinerary!

Turns out Bosnia was always part of the itinerary but we just didn't know it. After the war in the early 90's when the borders were redrawn Bosnia kept a very small part of what is otherwise the Croatian coastline (check it out on the map below).

As we slowly approached the border patrol we put on our best behavior and reached for our passports, but just one look at the navy blue cover of the American passport and we were waved on, they didn't even look at them! As we drove for the next 10 miles in Bosnia we couldn't help but think that they probably don't take too kindly to citizens from countries who bombed their country.

Alas, we quelled our anxiety like any good American would in this situation, we stopped for ice cream! Nothing a bowl of chocolate ice cream couldn't make better. I can now check "having an ice cream cone in Bosnia" off my list of things to do. 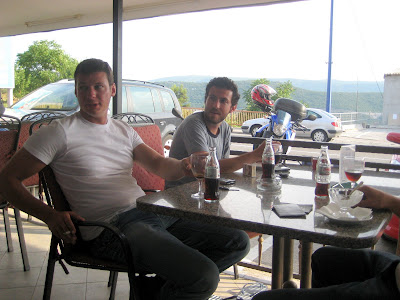 (Our friends Basile and Joe at our ice cream pit stop. Basile was driving the motorcycle seen in the background.)
Posted by Katie Shaver at 4:23 PM

If they added travel tales like yours to high school geography courses, no one would ever miss class.