My sincerest apologies to Mr. Wade Shaver - my future father-in-law - but Miller Genuine Draft has been unseated. Further apologies to Mr. James Mueller - my father - Genesee cream ale, while never ranked, has been further beaten down. 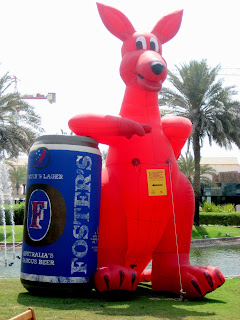 The Giant Red Kangaroo of Hopfest and our european friends have opened my eyes to what beir is. The beers that we had were better described as a savory milkshake than anything I've had before. They were good - but sadly, it only comes once a year.

The event is held each summer in Irish Village (aptly named) in Dubai. For one day, they cover the whole place with a tent, air condition it, cover the floor with sawdust, and set up stands with 120 types of beer. That's it. A tent, some beer, and a lot of British, Aussies, and Kiwis. Nope, no Americans - we were clearly the only ones. Ironically, the bands played nothing but American music - and I mean Southern: Sweet Home Alambama, Country Road (Take Me Home), and many, many more. Not only did they sound good, but they dressed the part: 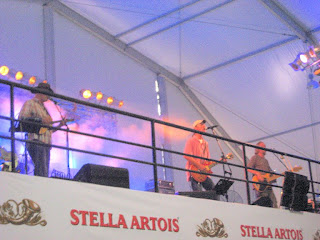 Katie and I managed to try quite a few different brews, but I think I had a little more variety than she did:

Matt:
Erdinger Weisbier
Hoegarden
Chimay
Delirium Tremens (which means "the shakes")
Leffe Blonde
Bengal Tiger
Katie:
Bulmers Irish Cider
(don't know how many though)
Next week for Ramadan, ShishaFest 2008! Is he kidding? Is he serious? Tune in and find out! 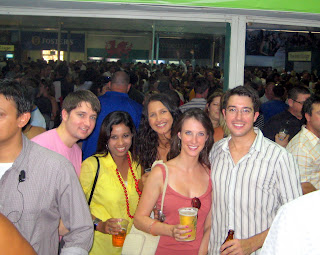 Posted by Matthew Mueller at 12:12 PM