Wow, I've Never Been Able to Take 6 Shots Before!

When was the last time your vacation destination was described like this?

The following are disease risks that might affect travelers to this area: Dengue, filariasis, leishmaniasis, and onchocerciasis (river blindness), and African trypanosomiasis.Plague occurs sporadically or in outbreaks. Schistosomiasis, a parasitic infection, can be contracted in fresh water in this region. Do not swim in fresh water (except in well-chlorinated swimming pools).

Many countries in this region have high incidence rates of tuberculosis and high HIV prevalence rates.

Highly pathogenic avian influenza (H5N1) has been found in poultry populations in several countries in Africa. Malaria is present in all areas (including game parks) at altitudes <2,500>
Doesn't this write up just scream romantic honeymoon?In our first pre-honeymoon activity together Matt and I spend some quality time together - sitting in an abandoned government clinic being poked with needles. We've decided to take a trip that we've been saving and planning for a number of years now and the honeymoon was the perfect time to do it! After a quick stop off at the Maldives post wedding (because we felt obliged to do the 'honeymoon beach thing' for at least a few days) we are off to Kenya for a two week safari!
This of course means that we need to under a whole cocktail of immunizations before we go. In the past week we've received: Hept A, Hept B, Meningococcal, Yellow Fever, Tetanus, Typhoid, and Polio. Now I feel like I can leap small buildings in a single bound! Contaminated water sources, and infected mosquitoes? Bring it on! I forgot to mention that we need to begin a 4 week anti-malarial drugs as well. Matt and I both like that on the packing it reads “the side effects of this drug might be indistinguishable from the disease itself”. What? Isn’t the point not to feel like you have malaria?
Last but not least we have to wear a bug spray with 50% DEET. Great, so if nothing else kills me I’ll at least go crazy and my tongue will go numb.But it’s no matter. Not only will this trip test that whole “I love you without makeup” theory, but I am willing to get plenty of these. 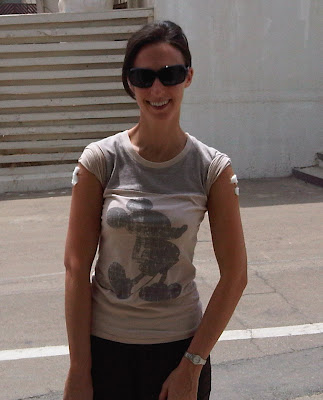 This Is The Dawning of the Age of Aquariums

It's the dead of summer here in Dubai, and that means everything has moved indoors. And what better place to move it than the worlds largest refridgerator, er, mall? 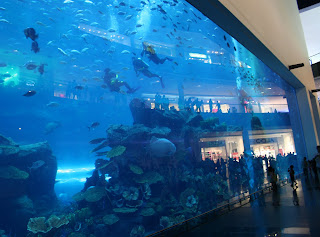 One of the best things to move out of the hot, hot Gulf sun is diving - now you can swim with the sharks and shop for shoes at the same time! After shopping at Aldo (see the reflection), my brother Chris and I decided to try not being lunch: 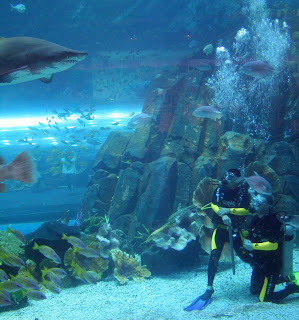 It was pretty surreal being on the floor of the huge tank, looking through the glass from the other side and waving all of the kids and families. You get this really, really weird feeling of what it would feel like to be a fish for a little bit. You know, breathing under water, having people stare at you, trying to not get eaten by sharks... 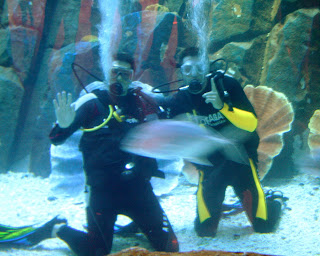 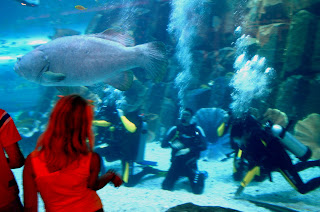 After the half-hour tour of the aquarium, we wandered into the cave where all of the sharks were sleeping (sorry, not pictures allowed in the cave!) and then on to one to a little corner with water filters, where we found a school of rays hiding and swimming in place through the current: 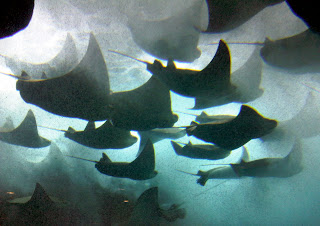 There were a couple of times that an over zealous shark would swim beneath us, and I'm frantically trying to keep myself from falling on top of it. Overall, I highly recommend the dive - you get near-collision exposure to more than a dozen sharks, and your fair share of freak outs. All that, and right next to the food court!
Posted by Matthew Mueller at 9:24 PM 1 comment: