Hanging on for Dear Life

First off, a public service announcement - No More Spam! In honor of the incoming administration, we've moved email servers, and now don't have any nasty spam issues to all of you law-abiding, diligent readers. So, with the exception of the two people out there who really wanted to take middle management courses in the Arab Peninsula, live just got a little easier! 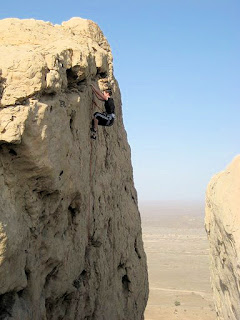 On to more interesting matters: Katie hanging off a cliff in Sharjah in UAE - way, way up - with nothing but her wits and a rope about her. This was only her second trip out climbing, but it's clear that if you're good at yoga, you're probably good at rock climbing.


A few people that have written books about rock climbing in the UAE (Dubai, Ras Al Khaima, Oman, etc) have kindly setup brand new clips and chains into the solid rock around the desert. As far as we can tell, they seem to work :) Just kidding - thanks to some research our worried parents did on climbing gear, apparently they've done a really good job. It seems to be a pretty tightly-nit community, as you can tell by the effort taken to donate water left at a campsite (I especially like the "Thanks" somebody wrote in response): 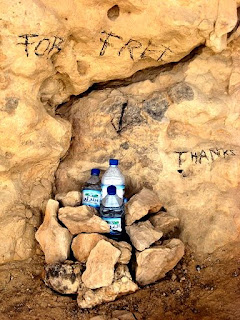 All this is fine and good, but I'm sure you're asking "You already live in the Middle East - that's dangerous enough. But now you're ROCK CLIMBING?" Don't worry folks - we're taking all of the necessary precautions. Especially those of us who aren't as good as Katie - check out these two bozos: 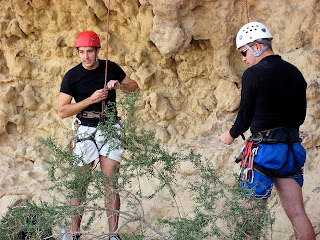 Posted by Matthew Mueller at 10:41 PM

A few weeks of rock climbing and you'll be able to move onto the advanced level yoga moves Katie.

Matt I have two words for you... longer shorts.