When the weekend hits in Dubai, the idea that "sleep is fun the dead" never rang truer. Thursday night starts a frenzy of activity that literally does not let up until Saturday. (The work week in Dubai runs Sunday - Thursday, so Friday is open for worship). In Dubai, "I'm just going to hang out and watch a movie" just doesn't fly with your group of peers. The weekends, in fact, tend to be even more exhausting than the work week! This past weekend, had us hopping all around town. Matt and I kicked of Thursday night with an exciting trip to Ace Hardware right after work. That's right, they have them over there. We started the weekend with a power drill and potted plant purchase - I think it set the tone quite nicely…

We were then crazy enough to actually think we were going to make it out to the Marina for a networking event aboard some guy's private yacht. The Marina is about 15 miles west of where we live, but rush hour on Sheikh Zayed road becomes completely hopeless, it would have taken longer to get there than the length of the cocktail event itself. For our DC friends - Sheikh Zayed road is our version of Route 66, only bigger and badder. It is 6 lanes in both directions and almost always congested.

We instead headed to our new friend, Nick's villa, for a delicious home coo 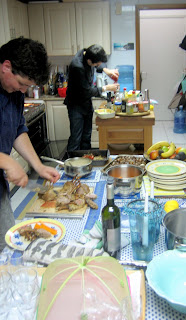 ked meal of lamp chops and cauliflower puree with a cranberry chutney. Matt, as usual, just could not resist helping in the kitchen. He is with our friend, Nick, in the picture. Well done, Nick! 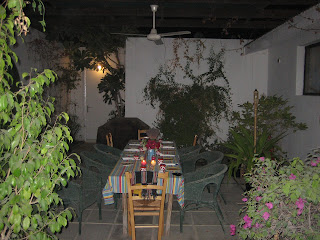 We left Nick's place at 1:30am and headed on over to the 400 Club at the Fairmont to boogie down with our friends, at what is considered to be one of the 'hottest' clubs in town. Pretty hot indeed if you ask me, especially when our good friend Nick inadvertently set my hair on fire with his cigar…it was extinguished promptly, I've been meaning to get a trim anyway. The music more than soothed my wounded hair, for the first time since we've been in Dubai we found a club that played some decent rap music in concert with techno and house. If I hear Zombie Nation or Sandstorm one more time I am going to scream! The night ended at 4:00am where we fell asleep as soon as our head hit the pillow.

Five hours later, like clockwork, our friend Basile calls to ask if we want to go off-roading in the desert on his four-wheeler (over there they are called quad-bikes). It doesn't matter how late we were out the night before he is practically biologically programmed to drive in the desert every Friday morning. Unfortunately we have to turn him down because we've got fun activities like hanging curtains to do! (Hence, the earlier buying of the drill) But we agree to meet him at the beach later.

We finally made it to the beach this weekend, and it was absolutely gorgeous. The water is about 80 degrees and blue like the Caribbean. It was a perfect day to lounge around in the sun. There are only a few precious months left to go to the beach until the heat is so oppressive that people won't even go to the pool. The beach is mostly populated by European expats, but you can check out a version of a conservative Muslim "bikini" below. (Coming soon to a Sports Illustrated near you!) 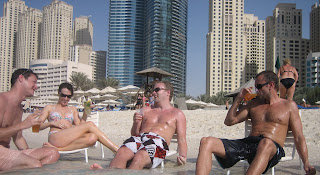 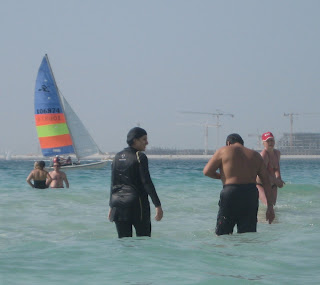 By sunset we retreated back to Basile's flat to shower and change for the evening. We headed to the Buddha Bar for dinner and drinks, and although we had a table reserved at a new club called Peppermint, the collective group decided that we could no longer rally for another late night on the town. We got home at 1:30am - an "early" night by Dubai standards. 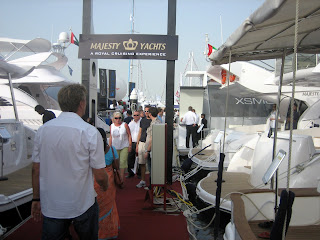 Saturday morning left us feeling a bit recharged, with a whopping 6 hours of sleep. We had lunch plans to meet our friends at the Barasti Bar, a beach side café in the Marina, and then to go to the Dubai International Boat Show. I can't say that I know much about boats, but I know that the ones we saw were big and beautiful. Matt and I feigned interest in purchasing a few yachts so that we could get invited onboard for a tour. (Oh yes, 10 million dollars is right in our price range.) Great thing about Dubai, is that you never know who anybody is so they have to treat you seriously! The boat I liked wasn't for sale, Noor 1. Guess who that belongs too? Yep, Queen Noor.

I think now it's finally time for a nap!
Posted by Katie Shaver at 8:13 PM

And somehow, after ALL THAT you managed to leave for the United States the next day? I think I checked the mail once last Friday and possibly managed to get something out of my car. Other than that, I don't think I left the computer or TV screen :) BTW...four-wheelers are actually also called Quads (Quad bikes) here in the US in your home state of PA.

The great thing about your new lifestyle is that, without sleep, you've removed one of the major causes of jet lag!

BTW, in the U.S. insurance industry, quad bikes are listed under "liability waiver". You can look it up.