I thought things were a little strange when we returned to Dubai. For one, traffic during the day on the busiest road in the Dubai was noticeably light. When walked to the bottom of our building to grab a salad for lunch I found that the four restaurants there were closed. Finally, when we switch on the radio every single station was playing traditional Arab music or reading from the Koran. After a quick check on the news, I quickly found out that the brother of the President of the UAE and Sheikh of Abu Dhabi, Khalifa bin Zayed Al Nahyan had died in a tragic helicopter accident just a few days ago. There aren't alot of details on the accident, but they are reporting that the helicopter with the Sheikh's brother and a few colleagues crashed into the Gulf while they were flying.
Dubai, along with the six other emirates are in a three day mourning period. Most government offices are closed and all outdoor activities including seating at restaurants have been brought inside. The restaurants at the bottom of our building are owned by Emaar, a government entity, so they were shut down. The funeral was attended by a number of high-profile leaders in the UAE and the President has reported been receiving condolences from all over the world. 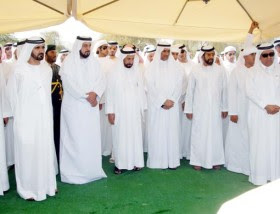 
What does Snoop Dogg use to clean his clothes...