All of Dubai is in a tizzy tonight for the Euro Cup Final match between Germany and Spain. Not only does the city love 'football', but there are big German and Spanish expats communities here, so there are alot of fans!

One of our favorite places to watch the game is at the Hilton Dubai Jumeirah Resort where they have a huge big screen outside on the beach. They are also known for creating signature drinks for both teams playing, complete with mini-flags! We have no idea where they procure them but they have them for every match.

We watched the semi-final match between Germany and Turkey a few days ago and although I didn't really care who won, but as the future Mrs. Mueller (umlaut optional) I figured that I should cheer for the German team and of course try the signature "Germany" drink - not really original, just pineapple juice - but I did it for the teeny flag! 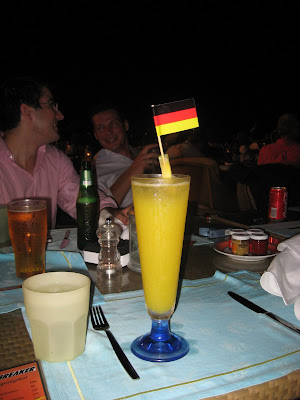