We got tricked last Thursday evening. Just when you think you've got the nightlife scene all figured out, you go and get duped! On Thursday night we were looking for an opportunity to give Lisa her first proper night out on the town, so after wine and cheese, we returned to the apartment to get gussied up while the boys debated our intended destination. The hot spot of the hour (because that is the longest you get to be cool in Dubai until something newer than you pops up) was the New Asia Bar at the top of the Raffles hotel. Apparently it is the see and be seen place 'du jour' and therefore we wanted in! The only weird thing is that we've been to the top of the Raffles hotel many times. There is a really nice, quiet, champagne lounge up there, called the China Moon Champagne Bar. So we called around to confirm that we were supposed to go to the top of the Raffles hotel to the New Asia Bar and not the lounge. We were told that the venue was brand new, and that it was a club not a lounge, and that it was really hard to get into. Didn't sound like the place we had been before so we decided to check it out.
Sure enough we arrived and were immediately engulfed in a swarm of people at the entrance to the venue. Everyone is trying to say they are friends with someone inside, that they have a table reserved, and giving the bouncers the "you don't know who I am" speech. Lisa said that the crowds were of NYC caliber, and that she couldn't believe how popular the place was. So the mystique surrounding this previously undiscovered place was on the rise! The situation seemed almost hopeless when Matt approached the bouncer and tried a different angle, "I've got two hot girls! Look at all these guys in line" he screamed. As with any self-respecting club, that was the golden ticket we needed. How could we have forgotten to exploit the girl-guy ratio! 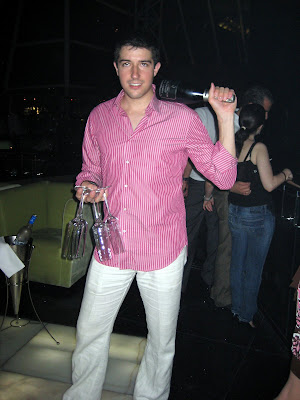 We were ushered into the elevator for the ride to the top of the hotel and when we were released at the entrance of the "NEW" Asia Bar, we realized that it was just the "OLD" China Moon Champagne Bar, but nothing had changed but the name, a DJ and the new steep cover charge. Genius. Someone better give their marketing team a raise. 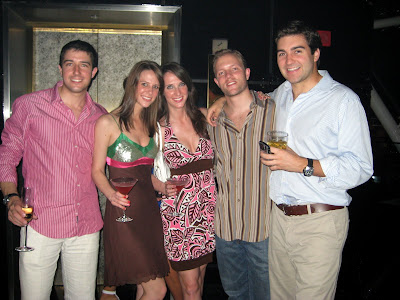 cheers for that mate, I was just about to check out the "The new Asia bar" and stumbled upon ur blog..