It Separates the Men from the Boys...

What could I be talking about: athletic prowess, intellectual power, or owning a sweet ride? No. We are talking about the new men’s fragrance from Baldessarini…Strictly Private. Although I’m not sure that smelling faintly of vanilla extract is going to make you a more powerful man, but they sure seem to think so.

Lisa was invited to this new fragrance launch as part of her role at the magazine, and was nice enough to take me as her date. It’s a good thing too, because she needed the extra estrogen in the room! When we first entered the ballroom lobby we realized that we were the only women in the room, that’s when Lisa took a peak at her invitation to find that we were invited to the launch of a men’s fragrance. Touché.

We had the chance to snack on some canapés (the samosas and the sushi get our vote!) while we were waiting for the official presentation from the brand. We became a bit confused however, because understanding the organizational chart of everyone there became difficult. This is what I picked up the ‘Baldessarini’ line is owned by ‘Proctor and Gamble’ who has chosen the ‘Selective Beauty’ distributor to bring the fragrance to Dubai and they then have their own PR and ad agencies who work specifically in the Middle East? Hey, if you know the answer let me know!

We got to preview their new ad campaign and plan for the product roll out in Dubai, which was pretty interesting. Did you know you could spend 2 years designing a cologne bottle? I surely didn’t, but their marketing team must know more that me! Afterwards we had the chance to have a lovely dinner on the terrace of the Raffles Hotel. It was a beautiful view of Dubai but there was one problem – listen closely because I probably won’t say this again for 10 months – it was cold! Our cocktail dresses weren’t providing as much warmth as we hoped but lucky for us the dinner courses kept our mind off of the temperature. 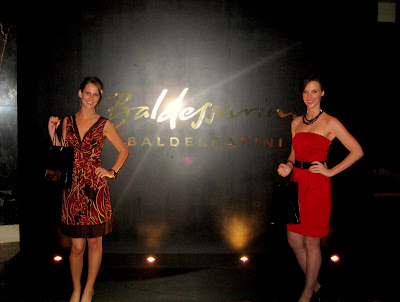 Just one thing however, the print ad campaign that is running in Europe features a ‘smoldering good looking guy’ standing in front of a rooftop pool with a few ‘babes’ sunning themselves in the background. However, the version running in the Gulf is a bit different; in the words of our French host, he clicks on the next slide to reveal the Middle East ad campaign and says “volia! and ze women are gone…” The bathing-suit clad women are conspicuously missing. But wait! The ladies can’t really be missing, because we know that only thing that truly “separates the men from the boys” – is a good woman. 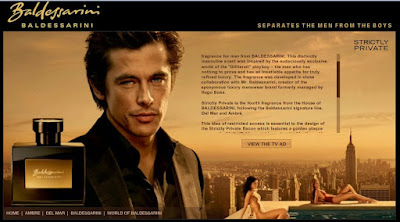 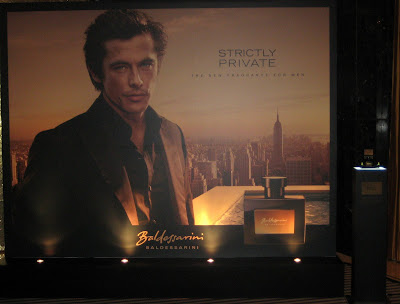 Exhibit B - The poster at our event, sans Hot Babes

And just in case you want to know a little more about the "Strictly Private Man", here he is in all his glory...

'Looks like a great party, but a lot of hype to disguise an inconvenient truth:

No cologne will separate men from boys (not even one by Proctor & Gamble, who also makes such powerful products as Metamucil and Mr. Clean).

Though we may not smell the same, men and boys are one and the same.