Last year we happened upon an interesting party in a tent on the beach which was devoted entirely to the deliciousness of every one's favorite creamy spread - Nutella! This year we found ourselves on the actual invite list (as opposed to last year's crashing), but the rules were a little different this time. First off, we found out that the party is not actually sponsored at all, nor does it have any affiliation with Nutella. Apparently this group of party organizers just love the stuff and have decided to celebrate it! This year they decided to make it a 'white party' (because white clothes and chocolate spread are such good bedfellows) and they really upped the ante this time by putting on a huge silent auction with all the proceeds going to the Palestinian Children's Relief Fund. 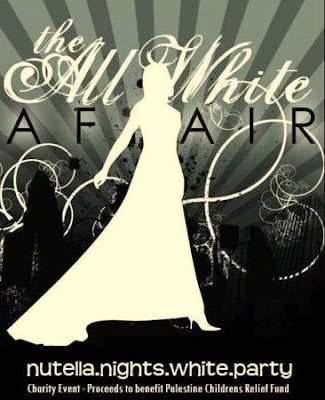 It was an all around great combination! We got to snack on cupcakes from our new favorite bakery, Sugar Daddy's, and bid on great prizes for charity. Things got a bit heated as the night went on, as Matt had his eye on one prize - tickets to the Porche new model test drive at the Dubai Raceway. It is an event run by Porche where they bring all there new models to the race track and let people test drive them while giving out driving lessons. Apparently, tickets go to VVIPs only and are not for sale, so needless to say there was heightened interest on this one! After a fierce bidding war which lasted until 2:00am, Matt is the proud owner of 3 tickets to the track! He and the final bidder when for a split of the 5 tickets, before they both lost their shirts! 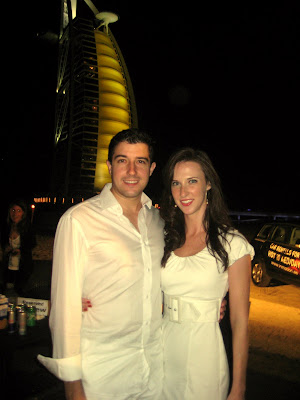 Of course I didn't want to miss out on the fun, or donating to a good cause, so I found an item to bid on too. The chance to have a hat custom designed to wear to the World Cup races. This year it falls on my birthday, so I wanted to have an extra special outfit! Luckily the couture hat world doesn't have a ton of affectionatos, so the bidding wasn't too steep and I got a great deal. There was some last minute competition but luckily I came out victorious!

We had a great night, even if it did last until 3:00am. We were pretty tired by the end, but it was all worth it and we were happy that all of the money went to a good cause. Good thing we had plenty of sugary snacks to help us make it through the end. What is it about competitive bidding that increases the appetite for Nutella? 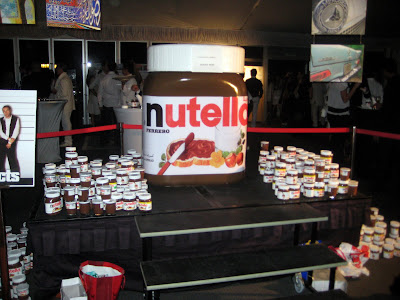 (We all donated jars of Nutella to send to the kiddies in Gaza.)

Congratulations on your winnings, though I'm not sure that "Matt", "Porsche", and "racetrack" are words I like to see in the same sentence.

BTW, I'll be sure to send your hatmaker a few shots of Aretha's special inauguration lid.

Finally - and I hate to admit it - without any competitive bidding to blame it on) Bonnie and I just dove into the jar of Nutella you left behind. And guess what - it really does go great on a white shirt. Thanks for the fashion tip.

Thanks for joining us! Was a pleasure having you both, thanks for participating and contributing.