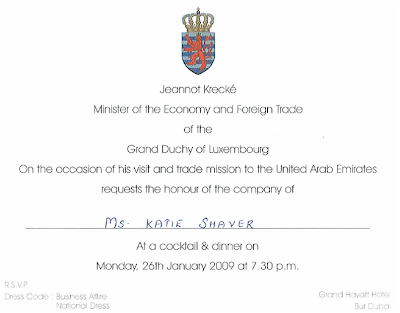 I was pretty excited when I received the above invitation! I wasn't sure I knew exactly what a 'Grand Duchy' was, but I was sure interested in finding out, and hopefully having the chance to meet Minister of Economy and Foreign Trade. The invitation happened completely by chance. I had a meeting with (my now new found acquaintance) Hedda who works for a world-wide knowledge management company. When I asked what she was up to in Dubai, aside from meeting with me, she mentioned that they work on behalf of the Luxembourg government and was in town for the week setting up meetings with UAE officials on behalf of the Minister's office. She then was gracious enough to invite me to the Minister's reception!

It was a really lovely, outdoor event, and I was able to nab Matt and invite as well, so we were able to mix and mingle together. There was great food and drinks, and the Minister even gave a speech touching on European-Middle East relationships.

And yes, I did get to meet the Minister! He was very personable and funny and seemed very much to enjoy being the life of the party. We spent a few minutes chatting about his impressions of the UAE, he gave me a brief tutorial on Luxembourgish wine and at the end he even invited me to visit Luxembourg!

I was really bummed that I didn't get any pictures of the event. (It's pretty hard to act composed while saying "hey Minister, smile!" so I left the camera at home.) Although lucky for me Gulf News was there and they covered the event, which appeared in the papers today!

A few closing thoughts about Luxembourg because I am sure that you. like me, know nothing about this precious little country. Here's some brain food:

*Luxembourg is a small landlocked country in Western Europe, bordered by Belgium, France and Germany
*It has a population of fewer than half a million people in an area of approximately 999 sq miles
*It is parliamentary representative democracy with a constitutional monarchy, ruled by a Grand Duke. It is the world's only remaining sovereign Grand Duchy.
*The country has the second highest Gross Domestic Product per capita in the world
*Luxembourg is a founding member of the European Union, NATO, United Nations, Benelux, and the Western European Union, reflecting the political consensus in favor of economic, political, and military integration.
*The city of Luxembourg, the capital and largest city, is the seat of several institutions and agencies of the European Union.
*Luxembourg lies on the cultural divide between Romance Europe and Germanic Europe, borrowing customs from each of the distinct traditions. Luxembourg is a trilingual country; German, French and Luxembourgish are official languages. Although a secular state, Luxembourg is predominantly Roman Catholic.

And there you have it! 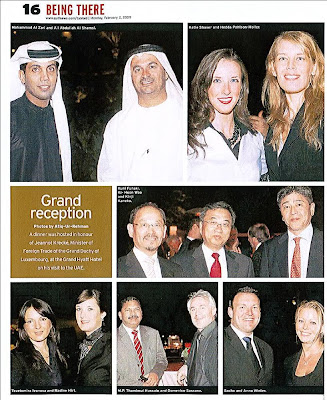 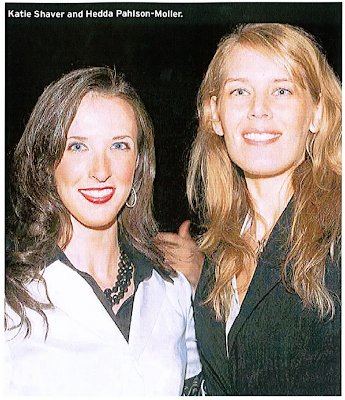 Did you happen to ask Hedda if the Mollers and the Muellers might be remotely related?

BTW..."999 square miles? Next time you see the Grand Duke, you might suggest that he sidle up just a little closer to Belgium, France, or Germany and make it an even 1000; much easier for the students in Geography class.