What Really Grinds My Gears: These Muellers on CNN Speaking for Me

You know what really Grinds My Gears? 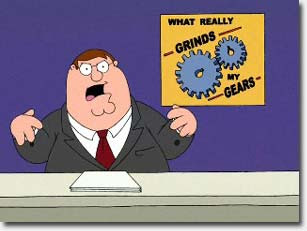 CNN has posted an article, titled "Obamamania hasn't reached Wyoming", starring Jack and Ted Mueller. One is a state government employee, and one is an insurance salesman. As a Mueller, looking to protect the good name, I propose that we re-title the article "Captain Obvious has not yet visited Wyoming".

I'm not interested in preaching Obamamania, but in setting the record straight for a certain group of misinformed Muellers. Come on guys, do you know the rest of the world reads this stuff? Let's alteast try to get some facts straight, we just look silly!
Anyway, just a few gems from this article:
Janet Anderson, 57, returned to Cheyenne after a career in the oil business in Texas. She worries about the federal government bailing out businesses.
"The Obama administration is taking consequences out of our nation."
She says, "If you go make a bad business decision and you lose your shirt, you just go to the government and get some money."
Ahem. Yes, the Obama administration. Henry Paulson in the Obama administration. Indeed. Not the Bush administration, no - they were just in office, made some decisions, and things happened. I think we should blame the new guy instead.
Cindy Hill is an assistant principal of a junior high school. She is afraid the Obama administration will dismantle No Child Left Behind and worries that his administration will leave behind huge debt for her son's generation.
"He's only 20 years old -- and the decisions being made right now, the deficit and how were approaching solving problems -- are going to impact his generation significantly." she says.
Deficit? Couldn't agree more. The national debt is $10,643,286,588,849 (and 79 cents). Interesting, though, that the national debt has been increasing an average of $3.41 billion PER DAY since September 28th, 2007. The election was November 4th. Just sayin' is all.
I'm afraid that so much of the responsibility of individuals is being transferred to Washington," says Jack Mueller, a 67-year-old retired state government worker. "Big Brother is going to be telling us what to do over and over and over again."
And over and over and over....Just don't tell Jack about living in the UK. Actually, his point is accurate. Big Brother is watching, just not in the way you'd think: 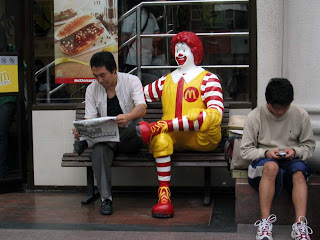 And that, dear readers, is what really Grinds My Gears. Over to you, Diane.
Posted by Matthew Mueller at 3:24 PM