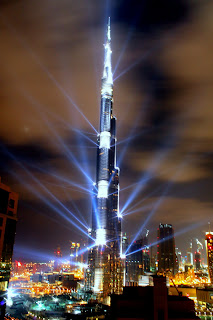 It's just like watching a baby being born. The Burj Formerly Known as Dubai (TBFKAD) has become the Burj Khalifa, and opened for business. Our building had a great view (see the picture at the top, shot from the balcony) for the festivities, and our friend Tom threw a party from his even better view six floors up. I'm sure you all know the deal by now - 828 metres tall, the highest pool, mosque, and observation deck. With all 18 mechanized building washers running, it would take 2-3 months to get the sand off the building.

I think it'll be best if we let Tom speak for himself in his Gulf News interview:
http://gulfnews.com/business/property/spectators-witness-a-slice-of-history-at-burj-khalifa-1.562422?localLinksEnabled=false
A host of ‘Burj Khalifa parties' also took place at the apartments of those lucky enough to have balconies offering superb views of the opening.

Tom Arnold, originally from the United States, threw a party in his Downtown Burj Khalifa apartment. He said: "The Burj Khalifa is not only a feat of modern engineering, it is also a symbol of mankind's relentless pursuit of innovative achievements.

The event I am hosted included guests from around the world who defy the destructive myths of this region and live together in one of the most peaceful cities around the world. This is truly a global city, and a universally appealing experience to witness and share together.

"As expats living in Dubai, we have come to consider this place our home, and we are proud of the city and what has been accomplished here in recent years. We are here working, not as individuals, but as part of a collective higher purpose.

"Today is a proud day for Dubai and my friends and I appreciate the magnitude of this historic achievement."

Good parties were had by all, but we haven't had a spare minute to get up to the top yet. More to come when we try out the lines for the world's tallest elevator, but check out some of the shots of the Burj we've grown up next two for the past two years: 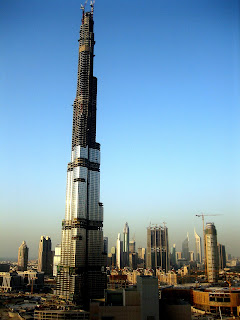 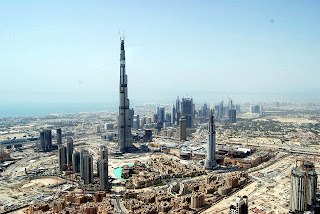 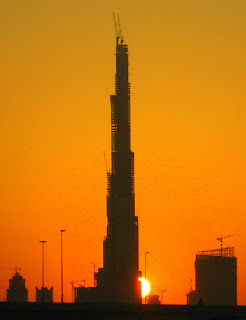 Posted by Matthew Mueller at 1:49 AM

Thanks for the preview - 'looking forward to seeing it in person next month (at least from the ground).