Puerto Vallarata & Punta Mita: A Whale of a Time

There are a number of traditions that we've created over the last five years in Dubai that we are bringing with us back to the States - one of them is that we don't sit still for a long weekend. Taking the opportunity to travel when given the time, is one of my favorite memories from our time spent aboard and I'm happy to say that when presented with the opportunity over President's Day weekend, we didn't miss a beat.  A quick expedia/viator/trip advisor/google map/spg points consultation lead us to enjoy some fun in the sun on Mexico's west coast in Puerto Vallarata and in Punta Mita (to the North).  Just a 2 hour flight from Houston, it was a nice reminder that we don't have to go halfway around the world, just to feel half a world away.

Situated on Mexico's west coast, the port was a sleepy little town until about 50 years ago when a few events converged to bring the city into the international spot light.  Namely among them:  the American director John Huston filmed his 1963 film The Night of the Iguana in Mismaloya, a small town just south of Puerto Vallarta. During the filming, the US media gave extensive coverage to Elizabeth Taylor's extramarital affair with Richard Burton, as well as covering the frequent fighting between Huston and the film's four stars. The subsequent publicity helped put Puerto Vallarta on the map for US tourists.  So we can thank Liz and Dick, in large part, for putting the Puerto on the map. 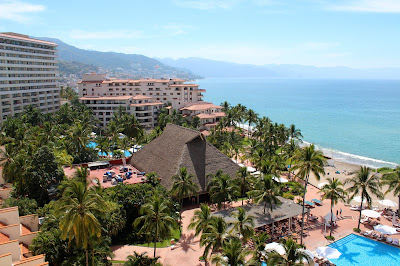 Sun, sand, and palms still seem like home to us. 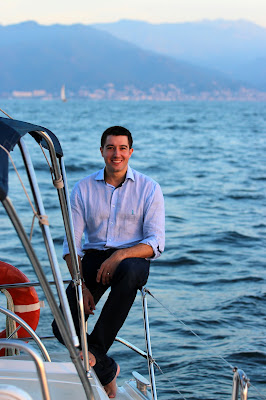 Matt ever-the-water-baby wasted no time in hitting the waves for a sunset cruise. 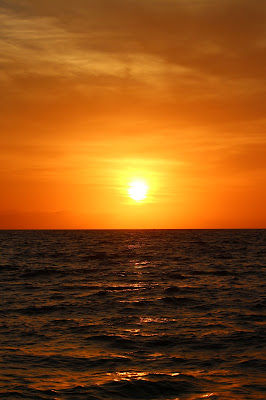 And the sunset did not disappoint. 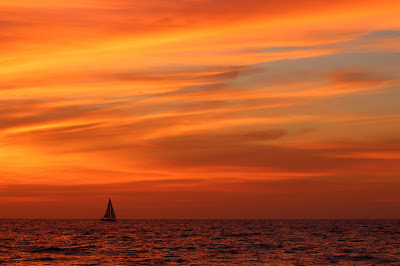 As the sun dipped below the horizon we were treated to stunning water color painting. 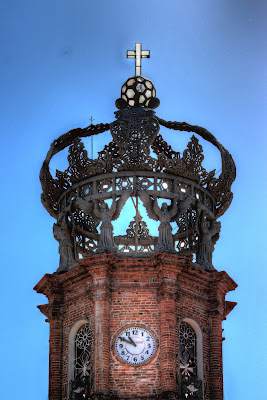 The heart of the city is the Our Lady of Guadalupe church, known for it's distinctive crown top. 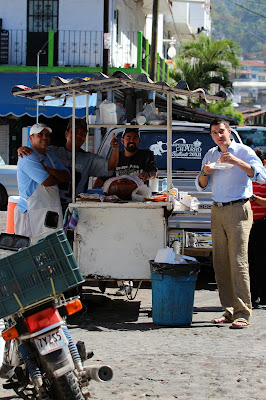 Best $1.50 we might have ever spent.  Chicken tacos to die for!  When we went back for more the food stand was gone! 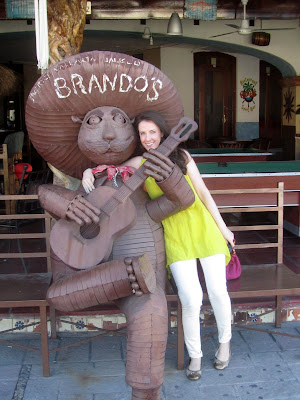 Just meeting up with a friend on the way to the marina. 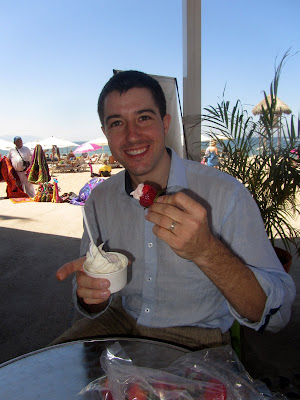 Score 1: Happening upon a farmer's market and buying a bag of delicious fresh strawberries.  Score 2: Stopping for fro-yo and realizing that said berries are in your backpack. 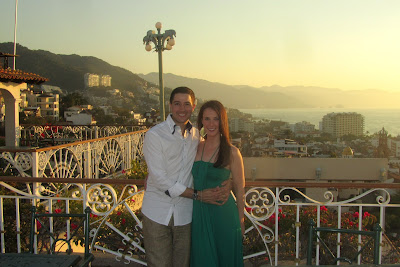 La Panoramica treated us to one of the best views in town. 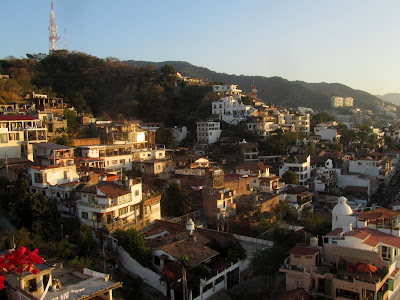 The highlight of the trip, by far, was the ability to spend hours whale and dolphin watching.  We had the opportunity to see these beautiful animals in their natural habitat, and in the case of the dolphins even jump in and swim with them! 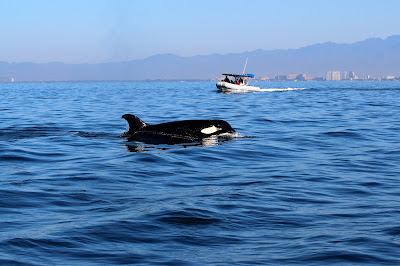 We did not expect to see Killer Whales on our dolphin trip so this was a treat! 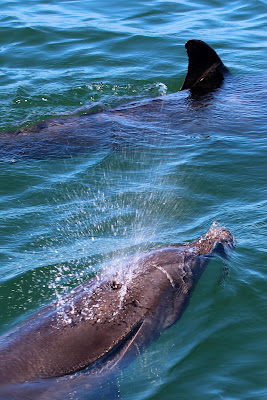 This was taken right over the side of our boat, these guys were in the mood to play. 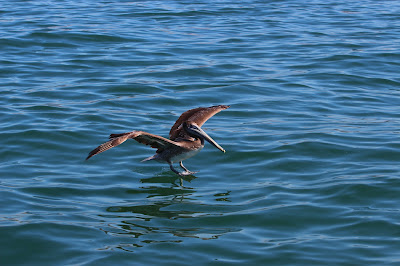 Expert water landing by one of the many, many pelicans. 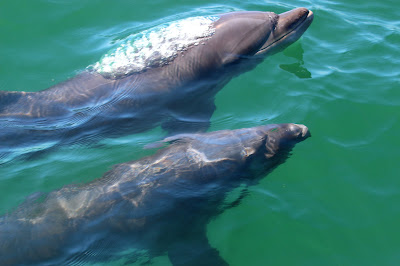 It's spring time which means the babies have arrived.  This little guy wanted a closer look at me, but the protection of Mom right by his side. 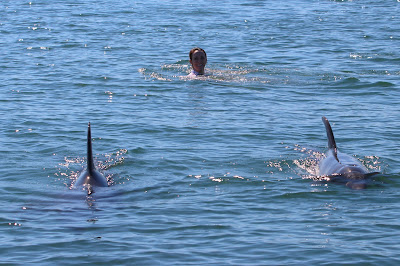 The visibility in the bay was low so I couldn't see the dolphins, but I could hear them.  Only when I would pop up would I realize that they had been swimming right next to me!  Kind of terrifying and exhilarating all at once. 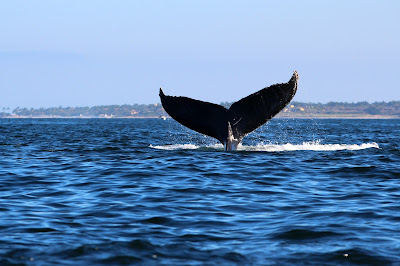 The humpbacks are also in town for the Spring and boy did they show off for us.  These photos are not using a zoom-lens.  This was some real-deal Moby Dick stuff! 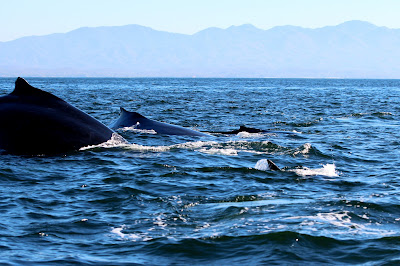 Mama, male-escort (not the father, but juvenile in training) and baby all in a row. 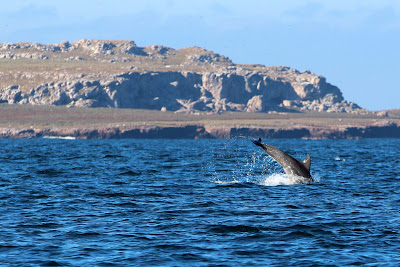 And of course the dolphins refused to be upstaged. 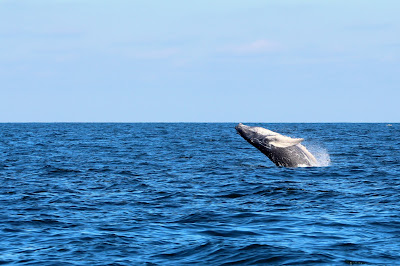 There's nothing quite like the surprise of a majestic 40 ton animal hurling itself out of the water and leaping through the air right in front of your boat.  It's an awe-inspiring and spectacular event.  And it's addictive.  It never, ever grows old for me.  In this case we were lucky that they were in a mood to keep leaping and we enjoyed it for several hours. 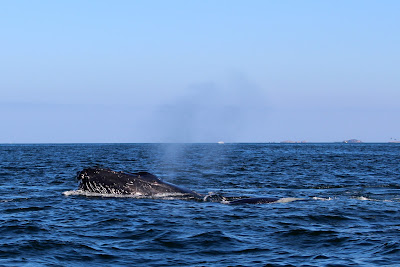 They don't often pull their face out of the water.  But it's really cool when they do! 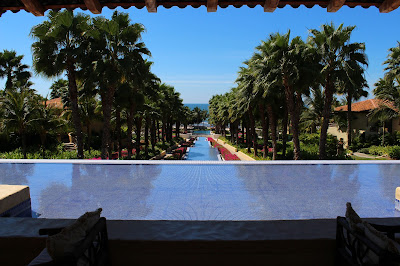 As we left Punta Mita I was left wondering how I was going to find a future home that would have room for my (first love) elephant and now my pet whale...good thing that at least know where I can visit them in the meantime.  Adios!
Posted by Katie Shaver at 10:24 PM