Running on Empty: The Dubai Marathon

As I entered the park there were bodies strewn everywhere on the lawn. People were rolling around in pain grasping at their knees, and ankles. Some were having ice water dumped over their heads while others were throwing their legs up on any flat surface they could find in a desperate attempt to stretch. Then the music started pumping and Ethiopian dancers flooded the scene. This was a celebration? The carnage on the ground was apparently the successful completion of the Dubai marathon! 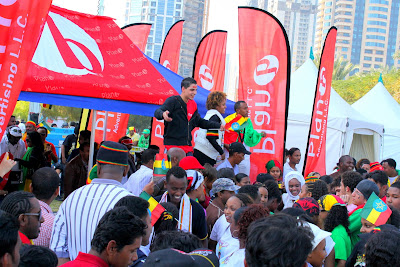 Their boy came in first place, it is still a reason to celebrate!


Upon closer inspection I realized the people writhing around on the ground were smiling and in high spirits – still looking good for running 26.2 miles! The course was up and down the Dubai coast line on the Jeremiah Beach road which provided a nice flat (although some runners would say boring) run. It’s known for being an “easy marathon” (is there such a thing?) so hopes were high that Ethiopian runner, Haile Gebrselassie, would break his previously set world record of 2:03:59. Due to a bad back he came in with a paltry 2:06:09, ahem. I’m still trying to take a shower, blow dry my hair and apply makeup in less than 90 minutes! Nice work Haile! 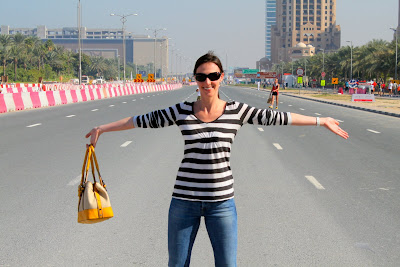 Probably the only time I will stand in the middle of Jumeirah Beach road! 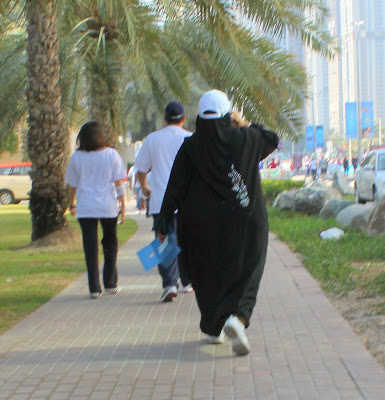 Rocking the sneaks with the abaya - love it!

In other news, our good friend John whose been training for months for his first marathon collapsed on the course with 1 mile to go, and remained unconscious for an ambulance ride to the hospital where he was unaware of the fact that he even ran a marathon for the next few hours. He also though he lived in Singapore, yikes! It was a severe case of dehydration. Thank goodness he is ok, but it goes to show you kids – don’t try this at home! 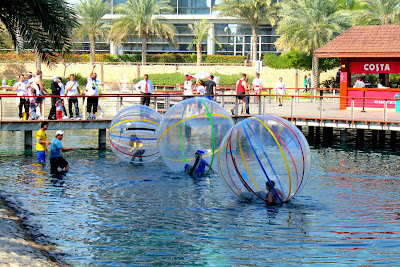 Lastly, if you need a safe alternative to wear out the kiddies, just stick them in one of these hamster balls on the nearby small lake in Media City.  They can run forever and never go anywhere!

It would be an easy choice for me, between the marathon and the hamster balls.