The music was pumping, dancers were performing on stage, the crowd was cheering, and someone in the audience just started the wave. A rock concert in Dubai, you might think? No. It was the reception that former President Bill Clinton got from the students at American University of Dubai.
There was a fever pitch amongst the crowd as he took the stage. He is much loved by the students for the funding and interaction that his Clinton Foundation has had with the university. It provides study abroad programs for students to travel to the US and vice versa, and recently funded an initiative where a group of students travelled to Cameroon to train teachers.
I have to say the man has a presence. I was amongst those on their feet and cheering like Madonna was about to perform! Matt and I scored seats in the third row of the basketball arena as members of the American Business Council. He was so close! President Clinton’s speech centered on creating positive interdependence in the world. From climate change, to micro-finance, the Middle East peace process, and access to clean water, he believes that we all have a role to play in influencing these problems. He recommended that we all create a framework by which we can assess whether our actions, decisions, and positions will make a positive or negative change in the world. 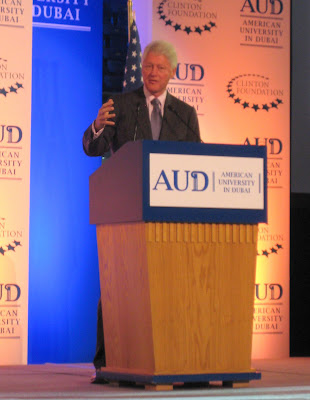 The man knew his stuff. Whether is was the statistics of country compliance to the Kyoto Accords, the rate of deforestation in Haiti, or the exact scientific causes and makeup of the carbon dioxide in the atmosphere, it was clear that he was true intellectual and even more clear that he was passionate about all the causes he spoke about.
In a disappointing twist, the local news media seemed to focus on what I felt was a slim part of his speech where he commented on the necessity of solving the Israeli-Palestinian peace process, and when he talked about the motivations of suicide bombers. More important was his message about the embracing the role of women in the world and the things we can each do to positively contribute to our shared interdependence.
He referred to the “Secretary of State” a few times, while the audience murmured “that’s his wife”! Finally, he joked that the best thing about being an ex-Pres is that you can now say what you want, that is unless your wife joins Obama’s cabinet and every day the press attempt to get you to say something that is going to put you in the doghouse! So looks the gag order is back on. 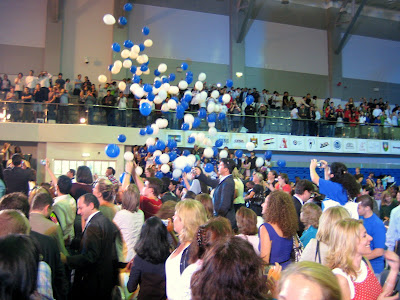 The speech concluded with a huge blue and white balloon drop. Umm…things the secret service does not like…the sound of “gun shots” going off every other second as the packed-in crowd moves towards the exit and smashes hundreds of balloons. Yikes! I think some hearts were racing. Check out Matt in the picture below (taking a picture) in the papers today! 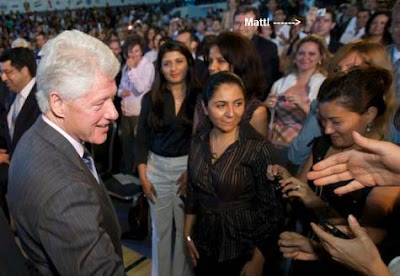 Well, if you two weren't on the Secret Service's watch list before, surely you must be now.