Just when I thought I had nailed Matt’s birthday present, our good friends Maurice and Gemma made the incredibly generous offer that Matt and I were welcome to their all-day pass to the qualifying race of the Formula 1 in Abu Dhabi. Gee thanks guys, that’s going to be really easy to top! 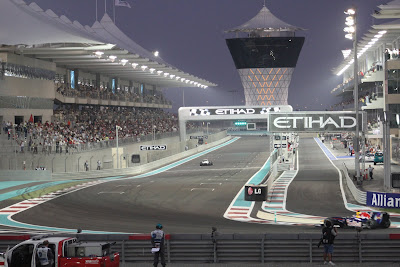 If you’re a fan of the sport you might know that our neighboring emirate to the West has been building an F1 complex for the past year, on its own man-made island, which includes 4 grandstands, a marina (where you can pull up your yacht to watch the races), a race track, a hotel covered in LED lights (which the track goes through), and a massive outdoor concert venue. This has been considered by some as Abu Dhabi “arriving” on the world’s stage by hosting an internationally watched event. The place is impressive. 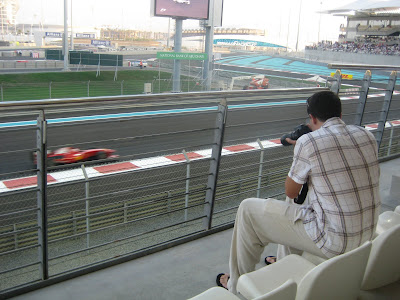 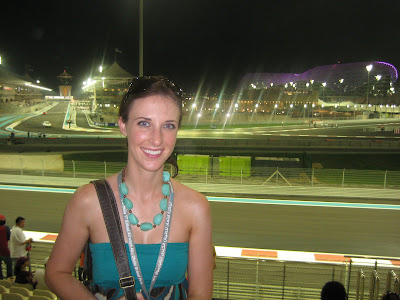 I wasn’t sure if I’d like the F1, but Matt’s excitement was contagious, so I was game. When we arrived they handed out ear plugs. Ear plugs? For the crowd? Thank god they did! I’ve never heard anything like these engines. Ok, I’ll admit, I LOVED the sound. I watched them go around the track for 20 minutes and every time they flew by our seats, which were right at a 90 degree turn, I could feel my teeth chatter, it was awesome! As far as the whole “race” thing goes, I was really hoping to see some sparring on the track, but it was just each driver individually going for the best lap time. Once, you figure out they are just racing the clock and not technically each other, it lost a bit of luster for me, but it was still great to see these machines and drivers in action.

Click here if you want to know more about the track! http://edition.cnn.com/2009/WORLD/meast/10/30/yas.marina.abu.dhabi/index.html

The evening concluded with a concert by the Kings of Leon which was fantastic!

You’ll forgive me if I still can’t hear anything…following up a Formula 1 race with a rock concert guarantees some serious ear ringing! 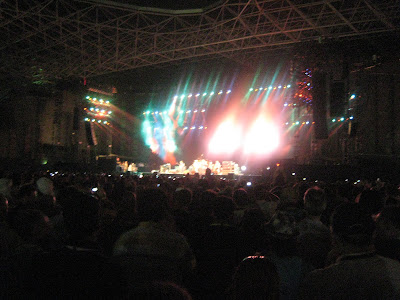 It would be useless to pretend that I'm not a little jealous, but I hope you kept your earplugs in throughout the concert, as well as the race.