The last time that I had a meal on a boat they tried to serve me this: 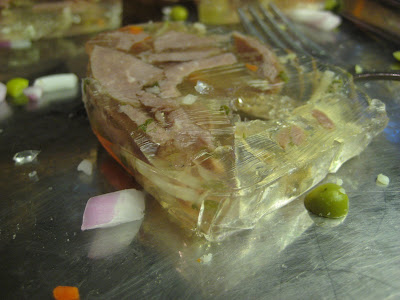 As much as I enjoyed Vienna, the whole meat, peas and gelatin combo wasn't exactly dancing on the palate! So it was with some obvious trepidation that Matt and I, decided to make good on a gift certificate, and boarded the Bateaux Dubai for a dinner cruise on the Dubai Creek.

Now if you are from Pennsylvania you know that it's really not pronounced creek, but "crick" and you also know that a creek is really just a narrow stream of water, certainly not something that you sail a boat down. The Dubai Creek really used to be a creek - a small ribbon of water coming in from the Arabian Gulf - until a huge public works project dredged the creek and made more of a Dubai River.

When I booked the table, the receptionist asked me what nationality I was. "Why?" I asked, "Do we need passports, are we going into international waters?" "We just need to know" was her response. Hmm.

We were welcomed aboard the sleek glass vessel by a staff dressed in all white and were immediately handed a welcome drink of fresh mango juice. So far so good. As we were guided through the center of the boat, they took us down the stairs to the all glass walls and gave us a table in a darkened corner, how romantic! It wasn't until the boat was becoming prime for departure that I realized they hadn't sat anyone at the nice tables in the elevated center of the boat. I wondered if we could change seats, when 2 crowds of Emirati women and men swooped in and were seated only in the center of the boat. That's when it occurred to me! We weren't given a romantic table, they were hiding us! The nationality question was to determine ahead of time who they thought would be presumed alcohol drinkers. Anyone who was keen to imbibe was put downstairs in the dark!

All joking aside, we had a great table, and it's a small price to pay for the relatively little sacrifices we have to make living here. The meal did not disappoint, it was delicious! And even better it was served on a schedule...just heaven. Living in Dubai you are forced to get used the epidemic of tardiness that affects everyone here. Every task you can imagine takes 3 times as long to complete because of total inefficiency. So "dessert will be served promptly at 10:20pm" was music to my ears. Is it possible that a dessert served on time tastes even sweeter? 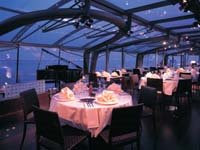 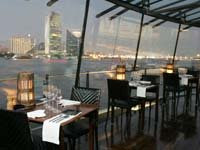 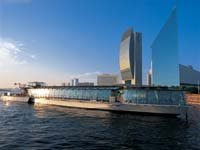 (Yeah, yeah the pictures aren't the best, we forgot the camera so we had to steal from their website.)
Posted by Katie Shaver at 2:28 PM

Maybe they seated you below to spare you from the paparazzi.

So - no head cheese served on this boat?