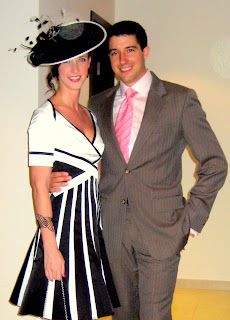 A fashion scandal at the races – that’s how I spent last Thursday night. Who knew that the world of designer race gear could be so cutthroat and cold? Ok, so it wasn’t that bad, but it did make for one interesting night.

It all started last week when we were invited by our good friend Lucy Chow to the Fillies & Fashion race event at the Nad al Sheba race course. It’s a night of watching the horse races with intermittent fashion shows featuring race attire.

Katie knows that the ladies take their fashion very seriously at these events and as such she was determined to be prepared. She agonized all week about what to wear, and apparently we even found a new use for her iPhone; texting her sister pictures of different hats from the dressing rooms in the mall.

When I asked her what 'look' she was going for, she said “I want it to be a modern day interpretation Audrey Hepburn’s race day outfit in my Fair Lady.” Right. Since I have no idea what that means I thought it would be best to keep quiet - that's just suicidal territory for any man.

I’ll admit when she emerged from the bedroom on Thursday night, she looked fantastic (I’ll let the pictures do the talking). I think I even understood the “old Hollywood glamour” look she was going for – although I’ll deny ever making that statement. 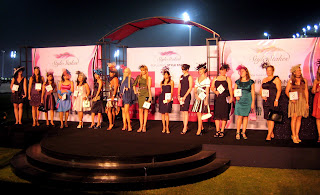 When we arrived at the event she was encouraged by the ladies at our table to enter the “Best Dressed Lady” competition. This is no small deal, the winner gets a $3,000 shopping spree and a trip to the Seychelles, so even I was excited when the judges narrowed the group of over 70 girls down to the Top 10 and Katie was among them. She was just one round away from the big prize and there was reason to be hopeful as the other race goers kept approaching her to offer their support. 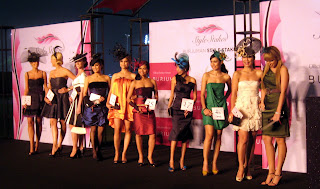 Alas, after the semi-final round of judging they selected their winner, and unfortunately it wasn’t Katie, so we went back to enjoying our dinner and having a good time. That was when an event staff member rushed to our table and said to Katie, “I just want to let you know that the final decision was down to you and the girl who won and there was a big argument, and on behalf of our event team we think they made the wrong decision!” Katie was flattered, but little did she know that was only the beginning.

And then it began: For the rest of the night she was approached by complete strangers who were expressing their outrage that she didn’t win! Women from all over the event approached her at our table, and in the bathroom and at the bar to tell her that she was robbed – people asked her name, offered to buy her drinks (I gladly accepted on her behalf), and she was even interviewed by the local news (I gladly made a fool of myself on camera). In fact she even emerged from the ladies room and told me that the women inside felt so strongly about her loss that they performed an impromptu winning ceremony and awarded her with a box of tissues. I'm not joking - I was standing outside the bathroom door listening to the signing. Now that is real support.

We had a great time meeting all the people who approached us, and I think now I understand what it must be like to be married Al Gore….just kidding. However, by the looks of today’s Insider magazine it looks like she's learned Al's lesson and won over the media as well the hearts and minds! 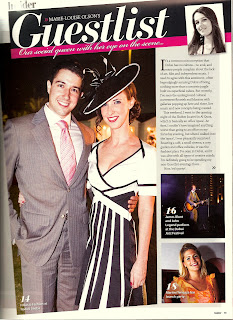 Posted by Matthew Mueller at 5:58 PM

As did Al Gore, I'm sure she'll move past this setback and go on to greater things.

But be very afraid, Matt. It seems Katie has moved beyond her shoe addiction to hats.