There is no recession in Doha, and the streets are paved with cheese

Shortly after boarding the absolutely packed Emirates flight to Doha on Thursday morning, I realized that some people might be taking "follow the money" a little too seriously. Then again, that's exactly what I was doing, so I tucked in for my first trip to the Qatar on the Arabian Gulf. 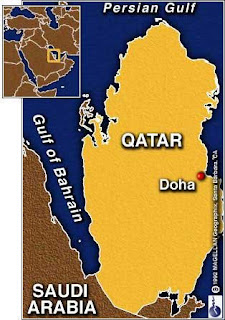 The wealthiest nation in the Middle East and by some accounts the richest in the world by GDP - $76,000 per person per year, to be exact - Qatar has a lot going for it. It's also grown a lot slower than other areas like Dubai, but then again, the cranes are still moving in Doha.

It's also only an hour-long flight, so a quick place to duck in and out of, though I'm not sure about the social and night life. In contrast to Dubai's active club scene, Doha has...has...not all that much. There's a nice waterfront area called the Corniche, but everything else looks a little bit like rural Texas. 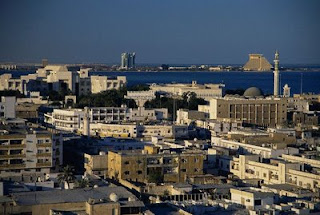 Getting off the less-crowded flight back to Dubai, I realized something - in a recession, you always want to head to the tourist destination. There's nothing like a good bargain, and Dubai is cheap these days. Time for you to come visit!
Posted by Matthew Mueller at 12:21 AM

The Doha photo certainly shows lots of contrasts with Dubai. The rural Texas analogy makes it especially inviting. And besides all that, I've never heard Homer Simpson say "Dubai!"