Actually, Ambassador Olson did have plenty of comments; just not on any of the economic questions he was asked! 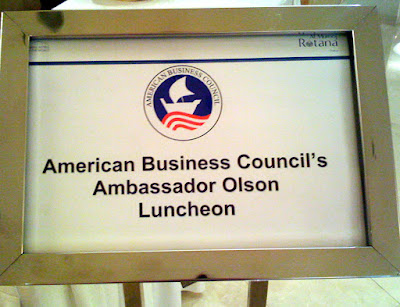 On Wednesday, Matt and I, along with a hundred of esteemed American Business Council members gathered for a luncheon to hear a speech from the current US Ambassador to the UAE, Richard Olson. I know that you are dying to know just a little bit more about His Excellency, so here you go:

He is a career foreign service officer and a member of the senior foreign service. Mr. Olson joined the U.S. Department of State in 1982. He has served overseas in Mexico, Uganda, Tunisia, Saudi Arabia (as the Embassy's liaison officer to General Schwarzkopf during the 1991 Gulf War), Ethiopia, the United Arab Emirates, where he served both at the US Embassy in Abu Dhabi (1999-2001) and as US Consul General in Dubai (2001-2003), and in Najaf, Iraq..
His Washington assignments include: State Department Operations Center (twice), NATO Desk, the Office of Israel and Palestinian Affairs (twice, including as Director), and the Office of Iraqi Affairs (NEA/I), including as Director.
His wife is also the US Ambassador to Kuwait. Talk about a Middle East power couple. 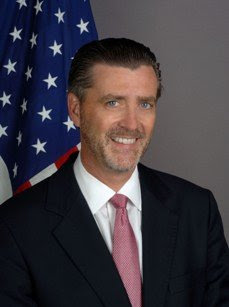 Now before I move on let's address the statement above (which comes from the State Dept.'s website). He has served "overseas in Mexico"? This part of the official bio was also read aloud at the luncheon to a room full of chuckles. Come on State Department, quality control!

Once he took the stage the Ambassador made a few interesting statements of which I've tried to capture the most relevant here.

“We seek the advice of the UAE on these thorny political issues, particularly in the case of Iran, in the case of Afghanistan and Pakistan, and on the question of support for the Palestinian Authority and more generally the Israeli-Arab conflict. The UAE is a very significant player in the region now, in a way that it wasn’t at the same level five or 10 years ago. ... There is a very good appreciation in Washington of the strength of this relationship, and I think it argues well for the future."
Mr. Olson said US exports to the UAE last year reached $15.7 billion, making it the biggest importer of US goods in the Middle East and North Africa, ahead of the usual dominant markets of Israel and Saudi Arabia. "The commercial relationship has grown from a core in the defense and oil sectors to encompass co-operation across a wide range of areas,” he said. “If anything these export numbers actually understate the extent of the business relationship — they don’t fully account for the wide range of services, including American health care management, educational institutions, engineering and other sectors being brought in to this dynamic market.”
He also stated optimistically, "Times are significantly challenging, but GCC countries are best positioned to recover from the credit crunch and the UAE will be at the forefront leading that recovery."

But when it came time for questions Ambassador Olson definitely played the role of the well groomed diplomat. Many of the people in the room wanted specific details on the presumed back door dealings that are happening to help ease the recession in Dubai. As it is assumed that the US is pulling its fair share of strings, the eager public wanted to know what Ambassador Olson knew. Of course much of the questions were met with a "I can only comment so much on this" or "we respect the sovereignty of the UAE government". So needless to say we didn't get any of the goods!

But we did enjoy a nice lunch in the presence of the Ambassador, and happened to sit next to the manager of the new Ruth's Chris steakhouse in Dubai. That is an essential connection worth having! 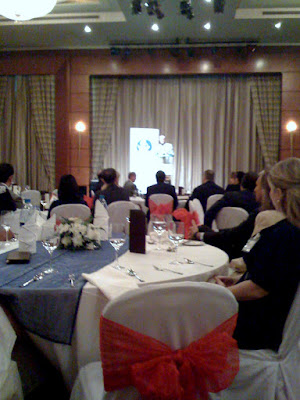 Reading this commentary, it strikes me that your blog should be required reading for high school civics/social studies classes. What student wouldn't do their homework?