The Best Birthday "Cake" Ever

Like a fine wine, this post has only gotten better with age. As I flipped through this month's Time Out magazine to check out this year's top restaurant awards, I was able to confirm just how bold Matt was in designing my 'birthday cake' this year.

This I promise will be the last post on the birthday weekend; however, I did promise an atonement story regarding my first birthday cake. You might remember from my previous post, regarding the party that Matt threw for me, that my cake looked like this: 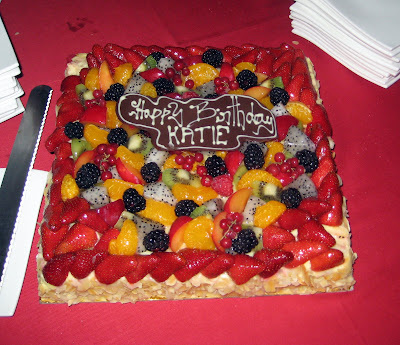 It was absolutely beautiful, and delicious, and all of our guests loved it. The only problem is that I can't stand fruit for the most part (especially for dessert) and I hate seeds even more. Although, I thought the design was really pretty and I am not picky - a quick scrape of the top of the cake and I was left with a very yummy pound cake with cream filling - just fine by me! Matt however couldn't stop 1) laughing and 2) apologizing because never in a million years would he order me a cake like that which I already knew. He told me that he had specifically ordered a 'yellow box' cake with chocolate frosting. I am sure the hotel considered this confection an upgrade. I am just not a dessert upgrade kind of girl. I like my sweets strait up, if you will!

Fast forward to the day at the races, after standing in the rain, and rigorously (ha ha) competing in the best dressed arena, Matt decided to surprise me with dinner at Reflets par Pierre Gagnaire, the absolutely amazing French restaurant we had frequented once before (reserved for very special occasions only).

I could go on and on about the food and the service, but to suffice, it is most likely the best restaurant I've ever been too. We were sat at our table and when they delivered our bread I looked up and it was Pierre! Pierre Gagnaire delivered the bread to our table and said "good to see you again". In a word "ahhhhh"!

I managed to settle down with a menu after a brief conversation with him, and we decided on dinner. The meal was superb and when it came time for dessert I was about to pass. I was so full, that I thought maybe I should skip it this time, when Matt said "I think that we should just see the menu again". However, instead of bringing out the menu, the manager arrived at our table with a flourish and set a bowl down in front of me. What was it? Crème Burlee? Chocolate Fondant?

It was a homemade soft pretzel dressed tableside with chocolate sauce and a scoop of vanilla ice cream...

I stared at my bowl in disbelief and looked back at him and said "I know that this isn't on the menu..." and he said "no it's not, and it's even harder to find a wine to pair with pretzel" he said as he winked at me. Matt had snuck off to the kitchen to request this special dessert based on my love of all things pretzel and chocolate - if you are from Pennsylvania then you understand - otherwise you are probably very confused. What's more is that they actually had to send some one out to buy the pretzels from a local bakery to complete the task.

I then flip open today's timely 2009 restaurant awards and the front page reads "Reflets Par Pierre Gagnaire was crowned the Best Restaurant in Dubai last night. The high-end French eatery also took home Best Contemporary European and Best Newcomer, much to the delight of Head Chef Olivier Biles. The restaurant was awarded the accolade after much deliberation over the emirate’s best places to eat out. And, despite the tough competition, it was no surprise that the posh nosh spot and baby of six-time Michelin-starred French chef Pierre Gagnaire took home the gong."

That's right. Matt personally asked a six-time Michelin starred chef and the kitchen at the best restaurant to serve me a soft pretzel with chocolate sauce dumped on it. If that isn't the best birthday cake I don't know what is!

As we left I jokingly asked the manager if they'd been convinced to add this new specialty to the menu, and he replied with a humorous tone "I don't think so, and if you tell anyone we made that for you, we'll deny it..." 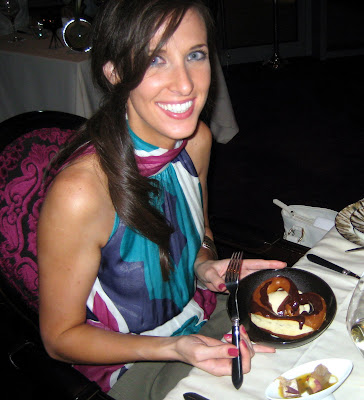 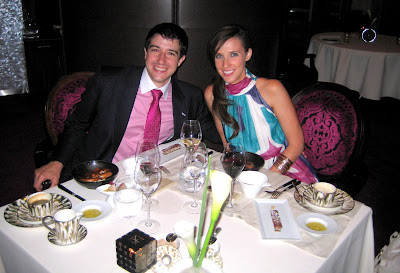 HAHA i love that!!! I definiatly understand the Pretzel cravings! Not that Baltimore is far away but no one does pretzels like Philly! Happy belated! ps I LOVED YOUR HAT/ENTIRE OUTFIT!!!!

What a memorable day!

As payback, I dare you to take Matt there for his birthday and ask the chef to recreate that notorious specialty of the White Spot in Charlottesville - Grillers!

That should be enough to get you kicked out of there for good.