Our teeny little neighborhood made it into the NY Times!  And no, it's not because Gadhafi is hiding out here or because there is civil unrest afoot.  We are being highlighted because of our farmer's market.  Oh yeah, we are going organic.

If you had any idea of the state of produce in Dubai you'd understand how monumental this is.  Dubai, historically basically hasn't grown anything with the exception of dates and camel's milk.  So nearly all produce is imported which means it is almost always in less than stellar shape and it's expensive.

Lucky for us there are some enterprising  locals and expatriates who have started small little organic farming outfits and they've banded together to create a farmer's market that takes place on the patio of Souk Al Bahar next to the Dubai fountain.

When we first found this mythical palace of produce we couldn't believe our eyes!  Heirloom tomatoes, arugula, white carrots, fresh milk, eggplant and strawberries.  Not to mention the homemade bread stand...

Matt filled a bag with 3 dozen tomatoes and was told it was 8.  Eight what? Handstands?  Peanuts?  Because there was no way we had just bought 36 tomatoes for $2.  Apparently, we had.  Matt and I backed away from the stand and contemplated a sprint.  Surely we would be out of sight because they realized their error?  But we were stopped cold in our tracks when we saw the stacks of strawberry cartons piled sky high.  How much?  5dhs ($1.25).  What per berry?  In the store they are imported from the US and cost 30dhs - yeah $8 for a pack of strawberries.  We still spent $8 but this time we came home with 6 packs of berries!

We exchanged the nervous glances of people who just know they are doing something wrong, but it seemed that the vendors were as happy as we were.  What was this some kind of produce heaven?

Oh and I did I mention they have peeps there for the kids to play with?  Enough said. 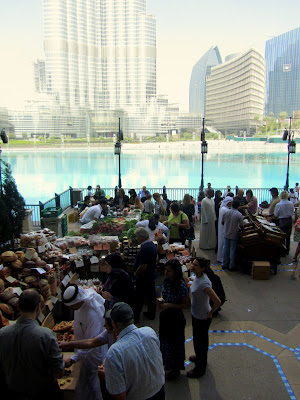 It's small but we hope it grows! 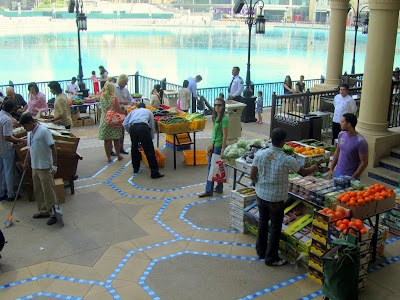 I'll take it all! 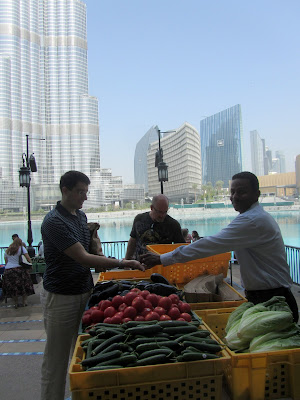 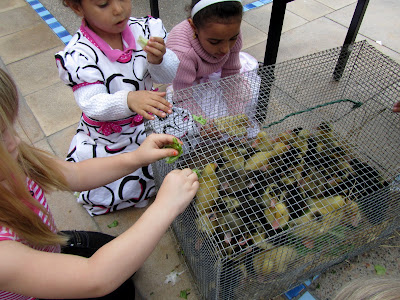 Complimentary lettuce to feed the ducklings - what a bargain. 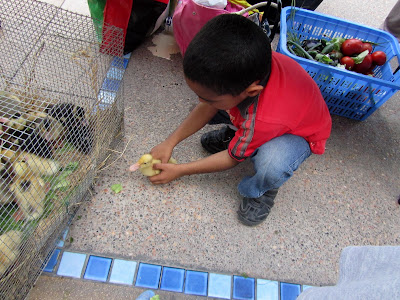 All Matt could think of was buying them all and releasing them into the fountain. (If that happens anytime in the future you didn't hear it from me.)
Posted by Katie Shaver at 5:40 PM