We get the weirdest stuff under our door!  Most community circulars remind you of dues and alert you to window washings.  Living in the shadow of the world's tallest building and its adjacent park means that we are constantly getting weird reminders and alerts for the many events that take place in the area.

The note recently was one of the weirder ones.  A quick primer: in the UAE it's not uncommon to see government sponsored (funded) mass weddings between locals.  Simply put the population is dwindling and with globalization and travel it seems that a lot of Emirati men aren't choosing to marry Emirati women (or at least not enough to grow the population).  It's not a big deal for the men who can marry anyone they want, but if an Emirati woman marries a non-Emirati man she is stripped of her citizenship and her children cannot be Emirati's either - how's that for incentive?

So in order to encourage the unions between locals, the government offers to pick up the tab and give you a nice healthy spot bonus to kick start your new life.  You just have to not mind that you might be sharing the ceremony with hundreds of others in a convention hall.

This note was just a bit different.  It was for a DEWA Mass Wedding.  DEWA = Dubai Electric and Water Authority.  The state-run utility company is hosting a mass wedding for employees?  Yup that's pretty much it. 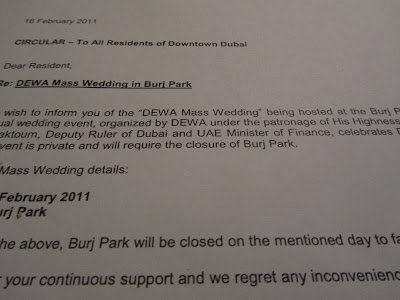 So I "crashed" the wedding from my balcony, of course.  (Men only, women celebrate separately). 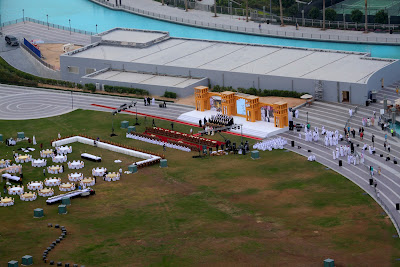 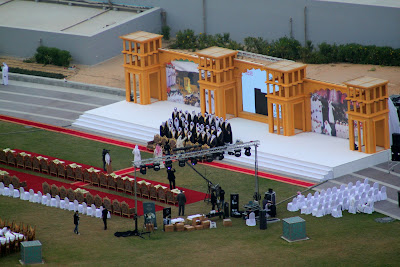 Next time you need an officiant at a wedding why not B&O Railroad?

Hope the evening was electrifying and their weren't too many water works at the celebration.