The Rings of Friendship: US-UAE Renew Their Vows!

It's been 40 years together.  Sometimes we bicker, sometimes we nag each other, but at the end of the day we just want to hold hands!
Last night the US and UAE celebrated 40 years of diplomatic relations by rededicating the Rings of Friendship statue in Dubai Creek Park.  The American Business Council hosted this special event and we were thrilled to have Sheikh Hamdan bin Mohammed bin Rashid Al Maktoum, Crown Prince of Dubai in attendance to receive the re-dedication (Sheikh Mohammad's son and next in line for the throne). 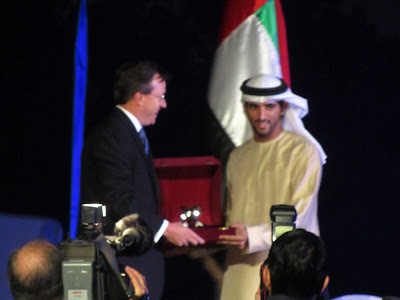 Consul General Justin Siberell and Sheikh Hamdan.
16 years ago the Rings were given to the UAE to commemorate 25 years of US-UAE relations and were received by none other than Sheikh Momhammed (then Defense Minister) so it was only fitting that 16 years later we rededicate them with his son presiding over the event.  The US was one of the first countries to establish an embassy in the UAE when they became a country in 1971 and today they are the number one trading partner for the US in the entire Middle East region.
Just a bit about the rings: The Rings, each 16 feet (4.9m) in diameter, 27 inches (69.6cm) wide and 9 inches (22.9cm) deep, weigh 6 tons and are constructed of the highest grade American 316L stainless steel, polished to a mirror finish. They rest on two curved pedestals of Vermont granite, which weigh more than 11 tons.
The Rings are illuminated by seven lights, representing the seven Emirates, with twenty five pathway lights leading to a raised sight. These lights commemorate the twenty-five years of friendship and positive relations between the UAE and the United States of America. 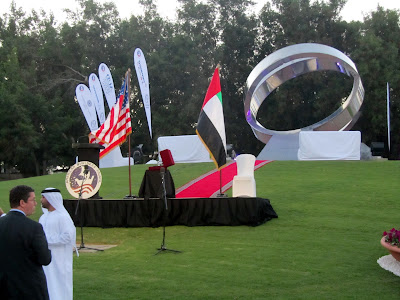 We had a great night for the event (not too hot yet!) and of course it was topped off with fireworks.  Natch.  Here's the article in today's paper. 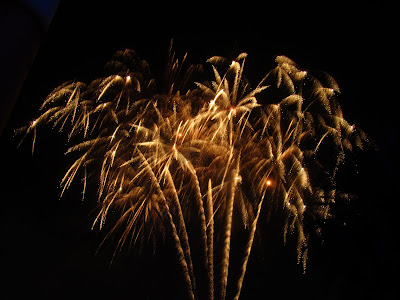 However, my favorite moment of the night - we had a local high school provide their jazz band for entertainment while we waited for the royal.  They delighted us with smooth jazz tunes until unbeknownst to their conductor the Sheikh had come down the path.  He quietly (looking somewhat stunned) strolled into the event to Dave Burbeck's Take Five!  I'm sure that's a first! 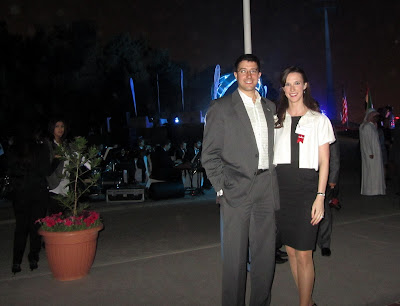