WINE house indeed!  The amazingly talented and tragically addicted Amy Winehouse performed a concert in Dubai this past Friday in honor of Gulf Bike Week.  We were all excited to see Amy especially since we had heard that she'd spend the last many months getting her act together and cleaning up her life.

Boy, was that report wrong!

This girl needs some help.

She looked "out of it" the entire time, was constantly scratching her arms, and clawing at her chest.  She could barely be heard but that was okay because she was slurring all of her words and most of them she didn't know anyway.  She often picked at her finger nails, looked at her feet and she was gurgling something on stage.  I'm not sure she even knew where she was.

The performance was only an hour long and after 3 longs she walked off stage only to leave us with her backup singers for FOUR songs, until she returned.  At one point her own microphone scared her.  I've never seen a human being so out of it.  If it's not hard drugs I don't know what it is...

She was subsequently booed by the crowd and a lot of people are mad they paid at all!  Honestly, I wanted to go up on stage and hug her.  She was a wreck.

So I did what any reasonable person would do - I sent the video and write up as a tip to celebrity blogger Perez Hilton in the hopes that he would circulate this and Amy's friends, managers, agents, anyone who knows her would stand up and take notice.

Check out the video here - there is a lot more where this came from.  I truly hope that she gets better.


We went to the Belgian Beer House beforehand, but I don't know how many of these we would have needed to make her sound good. 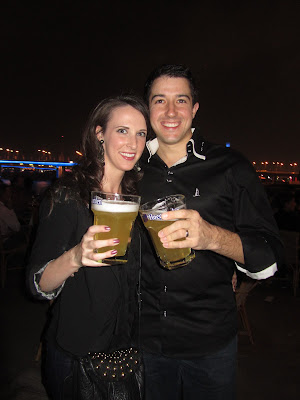