"Is the building moving, or is my fasting causing me to hallucinate?" That was the question that my colleague asked, when he burst into our conference room. At first we suspected that it was indeed the fasting because we hadn't felt a thing. That is until we realized that the rest of our company on the 31st floor of our building had evacuated, as did all the skyscrapers and office buildings on Sheikh Zayed Road. Apparently we had just felt a diminished version of the 6.1 earthquake that just hit Iran. 50 miles away it had leveled 200 villages in Iran, but lucky for us we just got a few jolts. As you might imagine, as one of the few cities in the Middle East that actually has sky scrapers, and as a neighbor to Iran, most news coverage immediately convened on Dubai to make sure all the buildings were still standing. Poor Iran, they get the quake and we take all the credit!

I think everyone turned a wary eye towards the still growing Burj Dubai tower and thought "you guys planned for this right"? Right? 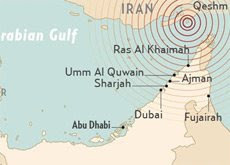 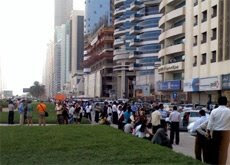 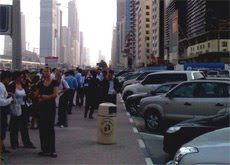 Wise investors will rent the top floors - they're likely to be beyond earth gravity.