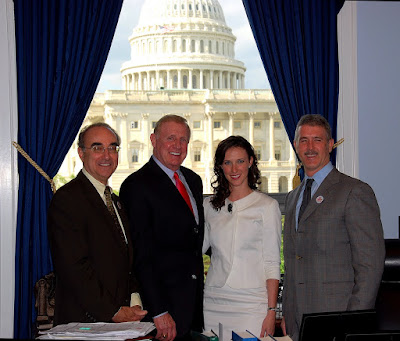 Congressman Dan Burton from Indiana's 5th district
I was warned on my way to Capitol Hill. Experts, lifers, current employees, hacks, and even my close friends told me that I may be all smiles as I stormed the gates but by the end of my week I would be worn out and totally dejected with the way my government works.

By way of background, because of my role on the Board of Directors of the American Business Council in Dubai I was able to serve as part of a delegation to the US from the Gulf on behalf of a group called MECACC (if you get a little flem in your throat you can pronounce it better!) the Middle East Council of American Chambers of Commerce. This group has been taking our message to DC for 25 years and I was thrilled to be a part of this year's delegation.

In sum, we believe that American's aboard are incredibly important for a whole host of reasons diplomatic and economic reasons. We have a ton of opportunity to influence big trade deals and import American goods into our host countries (which equals jobs at home) but we are pretty limited in numbers and we believe that this is namely because of unfair US tax policy on expatriates. The US is the only industrialized nation in the world that taxes based on citizenship and not residency, and the rest of world is laughing all the way to the bank. I won't proselytize, but if you have any interest in knowing more check out these great articles. And if you really care I have a great PWC study on the issue:

http://www.ocregister.com/opinion/tax-246359-income-america.html
http://www.time.com/time/world/article/0,8599,1983238,00.html
Anyhoo, now that it is in the national interest to double US exports in 5 years based on President Obama's State of the Union imperative, we received a warm welcome on the hill as our issue was thought to be part of a bipartisan solution that could help by increasing exports to the world over.

I left my week on the Hill with a profound respect for the work that both the members and their staff do. They are hardworking, smart, professional, and dedicated people regardless of which side of the isle they come from....
...for the most part. A member who will remain nameless (but is in one of pictures here), asked in our meeting, "If I come to Dubai how long would it take me to rent a car and drive on down to Beirut?" I politely had to stress that Beirut was Northwest from Dubai and is better reached by plane in a 4 hour flight. Hmmm. To which he said "oh it doesn't really matter, I'll charter an army jet to get me there anyway."
Oh boy. Smiling Katie: 1, Cynical Katie: 1 -it's a dead heat! 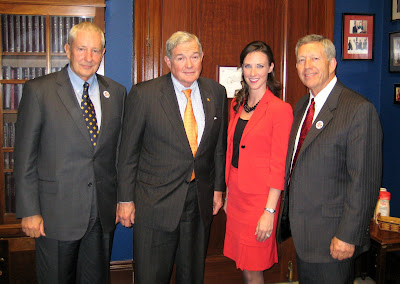 Senator "Kit" Bond from Missouri (he's in the yellow tie) 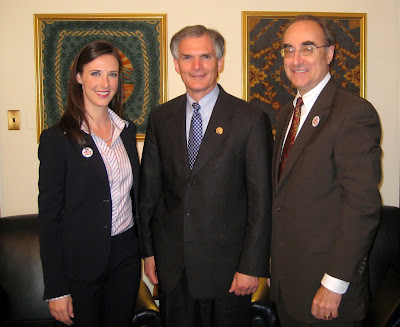 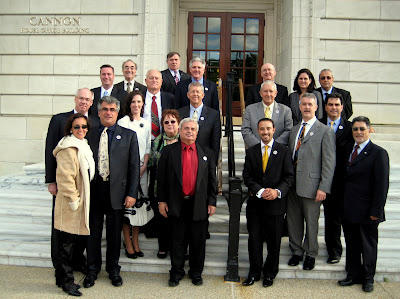 The MECACC team on the steps of the Cannon Building
Posted by Katie Shaver at 5:01 PM

We're all looking forward to the day when a young expat reports on her visit to Cong. Katie Shaver's office.