Top Gun - courtesy of the Dubai USO and Navy League 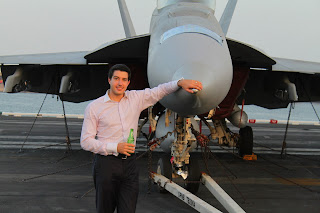 Normally, I hate being a taxpayer - but this week was not one of them.  Sure, roads are nice, sometimes our legal system works out, and hey - everyone enjoys filling out census forms, but the real action is when you can kick back, have a beer, and watch the sunset on the deck of an aircraft carrier. 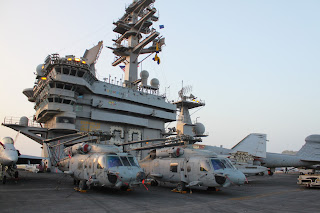 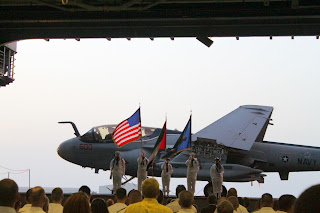 Mind you, I felt a LOT safer standing next to an F/A-18 Super Hornet than I usually do in Dubai, and for that, tax dollars well spent!  Besides, when your wife is out of town, you have to do something to occupy your time - it was either this or actually going to the gym. 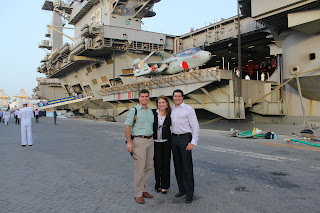 Some fun facts:  The USS Eisenhower (pictured here with our friends Maurice and Gemma, who come free with every carrier purchase), was commissioned in 1977, carries two nuclear reactors, 60 aircraft, and a little over 6,000 sailors.  Typically, they don't let civilians command the whole ship, but since I asked nicely: 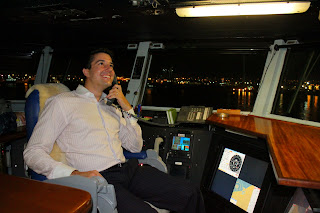 All in all, an amazing evening (they even had snickerdoodles - thank you very much, Navy chefs), and it was a pleasure to be a part of it.  This was also a special occasion, as the having the Eisenhower Strike Group in port was the launch event for the Navy League in Dubai, as well as a USO Event.  If you're living overseas, and have that little extra change in the pocket thanks to lower taxes, I highly recommend you donate to the USO or host for the Navy League when they're back in port.  Otherwise, they may never let me back on one of these things! 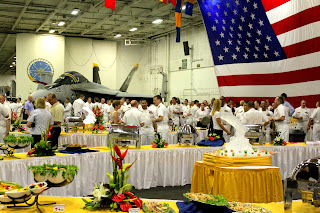 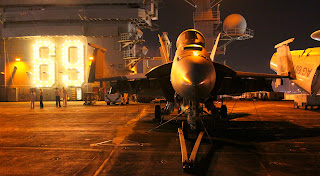 Posted by Matthew Mueller at 9:24 AM

If you want to keep Katie from ever leaving town again, just tell her that they had a little auction on the Eisenhower and you bought a little something...