Any lady can attest to the the myriad of tools that lie within our beauty regime.  We've got gels, sprays, lotions, pins, brushes, and "that thing that looks like a mid-evil torture device" according to Matt - eye lash curlers.  However, in my quest to perfect my throwback 1940s do, I didn't think that I would be standing in the bathroom cutting up a dry sponge and swearing like a sailor. 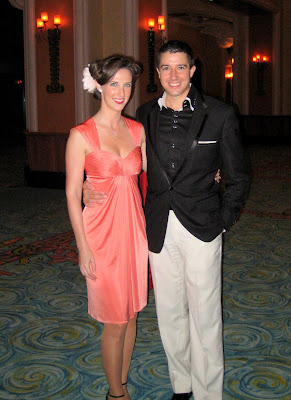 It all started the evening before.  Matt and I had been invited to the USO's annual gala (where all the funds go directly to the troops)!  It was a big band 1940's event and patrons were encouraged to dress from the decade.  I've been watching 'The Pacific' lately and I decided that I was going to attempt the quintessential decade do - the "victory rolls".  A quick YouTube tutorial on how to get 1940's hair in less than 10 mins gave me the confidence I needed to achieve the look. 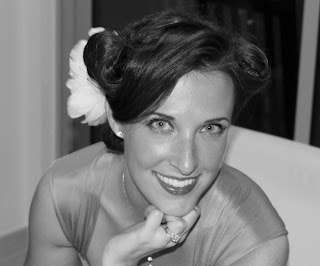 Boy, was I in over my head.  Hair needs to be set in rolls, then teased, then wrapped around 'filler sponges', then pinned and rolled into place.  Ninety minutes later I realized why they were called victory rolls - because by the time you finish them you want to scream "VICTORY" over your poor head of hair.  I gave it my best shot! 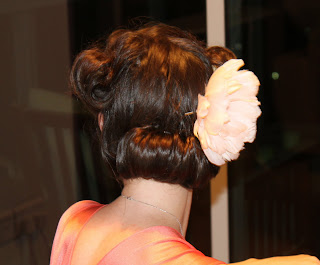 So off we went, and had a great time enjoying the musical stylings of the Liberty Bells and the big band musical.  We boogie-woogied our bugle boy all night long. 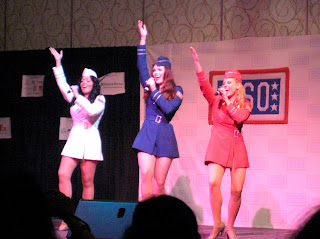 Then, in a total surprise visit, her Royal Highness Queen Sylvia Nagginda Luswata of Uganda showed up during the evening to lend her support.  Of course, I didn't expect to meet a Queen with kitchen sponges in my hair - that will be our little secret! 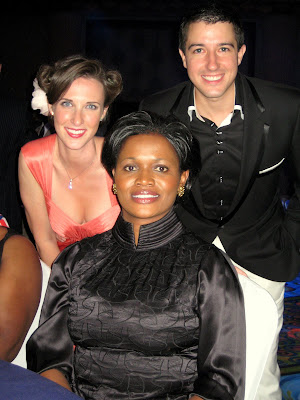 No offense, but you look right at home with the 40's look, Katie. Love the B%W photo.

For the sake of parity, I'd like to know how much time Matt spent on his hair for this event - less than 90 minutes?

your hair looks amazing!
i just stumbled upon this blog, but it is great!!!