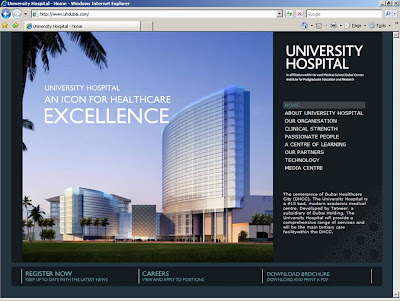 Yesterday there was a big press conference offically announcing the plans for the University Hospital and attached Harvard Medical School in Dubai Healthcare City (or UH and DHCC for those in the know...). But don't be fooled - in Dubai parlance, a "launch" just means they'll be opening at some point (in this case, doors open at the beginning of 2011, and even though we're 9 hours ahead, that's still a long, long time!)
The team there got really BIG news, which is that Sheikh Mohammed bin Rashid al-Maktoum, affectionally refered to as "Sheikh Mo" is going to lend his moniker to the project. Although the formal name will be much longer, since anyone worth knowing here has about six of them. It is expected to be dubbed Sheik Mo Medical Center. Dubai One, the English speaking news channel here, covered the press conference on the news last night. (Check it out here, and be sure to select 21 January 2008 for the archive date.) Everyone is really excited!
Posted by Katie Shaver at 9:48 AM

Wow!! I feel like I've just had a
"alice in wonderland" experience seeing all your great pictures.Keep it up...I love it!!
Hope you get your days and nights
on a regular schedule soon. And when you do please email Derek & Alison so they can use your method on Madison! She still hasn't got the night and day stuff fully worked out...but she's a cutie!!
Take care and continue on with this
great adventure...I'm loving it!
Love,
Aunt Sherry