If you were ever wondering what you could do with that $11M you've got lying around, we're here to help. Option A: a five-bedroom apartment on the east side of Manhattan, complete with river views and 10'6" ceilings. Or, Option B: the Christmas tree that just rose in the lobby of the Emirates Hotel in Abu Dhabi. Standing 42 feet tall, the merry holiday plant is dripping in 180 baubles consisting of diamonds, pearls, emeralds, and rubies. The most expensive piece alone costs $1M. What's that about it being the most wonderful time of the year? 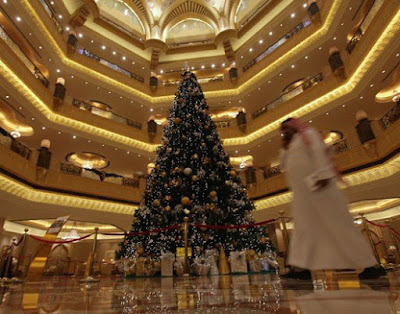 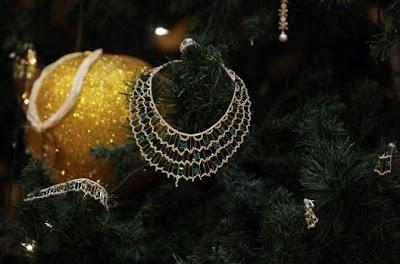 As you can imagine the tree is getting a lot of attention and not really the good kind.  Most find it in bad taste and a totally inappropriate show of wealth at a time when most Christians focusing on giving.

Wait!  Stop the presses!  What's this?  An apology?  An actual admission of lack of taste?  This really is a Christmas miracle!

Today from the AP:

ABU DHABI, United Arab Emirates – An Abu Dhabi luxury hotel that boasted an $11 million Christmas tree decorated with gold and gems admitted Sunday it may have taken the holiday spirit a bit too far.
A statement from the Emirates Palace hotel said it regretted "attempts to overload" the Christmas tree tradition by adorning it with premium bling including gold, rubies, diamonds and other precious stones from a hotel jeweler.

The statement was a rare bit of reflection on the Gulf's ethos of excess. The tree was unveiled last week with full fanfare in a hotel that features its own gold bar vending machine and a one-week $1 million package that includes private jet jaunts around the Middle East.

But the hotel management apparently had second thoughts after questions arose about whether the opulent tree was innocent good cheer or unfortunate bad taste.

The hotel regrets "attempts to overload the tradition followed by most hotels in the country with meanings and connotations that do not fall in line with the (hotel's) professional standards," said a statement carried on the state-run news agency WAM.

The hotel even tried to distance itself from the 43-foot (13-meter) faux fir in one of its rotundas, saying a hotel-based jeweler was solely responsible for creating and decorating the tree.

"The hotel is just a venue for exhibiting the tree," the statement said.

The hotel also claimed the tree was not a stunt, but rather an effort to boost the holiday mood for its guests based on the United Arab Emirates' "values of openness and tolerance."

Ah yes the ol' 'the jeweler made me do it' excuse.  Oh well guys, here's an A for effort.  You can try again next year.  Higher me as a Christmas consultant - I'm going to suggest tinsel and popcorn strings!
Posted by Katie Shaver at 10:54 AM

They could easily turn all this negativity around by pledging to donate the proceeds of sales of the tree's ornaments to a specified international charity.

The Mueller Fund comes to mind.