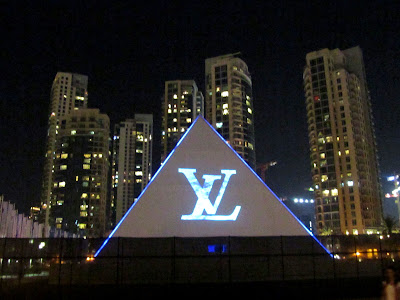 Don't worry, I don't know what most of those words mean either.  What I do know is that a bunch of French guys came in and erected a white pyramid-shaped spaceship on the lawn in front of our building. 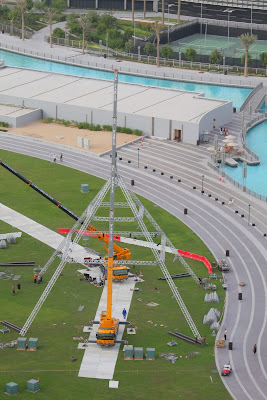 Apparently to inspire fans of the Louis Vuitton WSTA Sailing Trophy (which culminated in a Dubai regatta), this mystical pyramid just sat there for three weeks tempting us to go inside and travel to another dimension.

When we did, we weren't disappointed at all - twelve sailing ship decks are inside, suspended over water pools and bathed in blue light, each with four LCDs displaying looped video of water rushing by.  Playing all around was a white noise "waves crashing" CD, and the effect was a bit overwhelming.

Seriously, I couldn't tell if Louis Vuitton was promoting sailing or time travel.  Either way, I think I'm supposed to buy my wife a purse.
Posted by Katie Shaver at 4:17 PM