...Because tomorrow, you could be in Riyadh!
But don't fear - the Saudi's can definitely help you feel more at home. Sure, non-alcoholic beer won't take the edge off, but it still tastes bad. And the wine? Take a look at this scene for a moment - sure looks like wine. 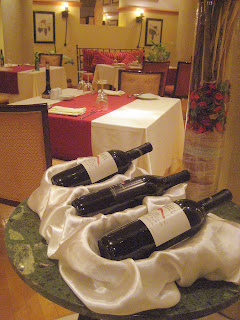 Smells like it too, but that's about as close as I'd get to it. Even the cost is the same - about $80 a bottle (if you could get wine in Saudi without smuggling through Bahrain - ahem). But take a closer look at the label: 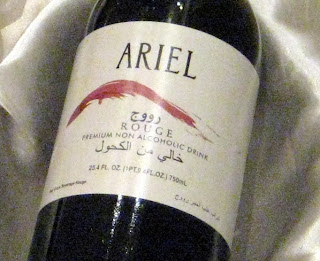 Oh, Saudis, you have such a sense of humor towards us infidels. "Premium non-alcohol drink"? Don't you mean "Welch's Grape Juice That Sat on the Docks Too Long So We Decided to Bottle It And Charge Expats Going Through Withdrawal?" Take Saudi Champagne - even the name is pretty funny (of course, BBC has a recipe here). With one part mint, one part orange, and 174 parts sparkling apple juice, it'll definitely keeps the kids on a sugar bender late into the night. That said, it is mighty tasty. Come to think of it, I'll go prepare a glass right now! 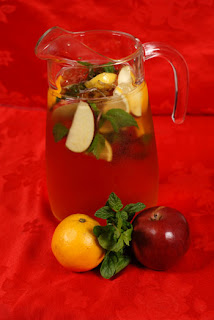 Now, since this is clearly a religious battle, we need to be fair and balanced. Let's hear from the Christian science monitor on the matter. And I quote: An article in the Christian Science Monitor, May 10 2001,http://www.csmonitor.com/durable/2001/05/10/fp7s2-csm.shtml says "150,000 cases of spirits, most of it Scotch whisky, are smuggled into the country every year, with resulting profits of $200 million. Industry experts believe that 70 percent is consumed by Saudis and therest by expatriates... ...80 percent of the smuggled alcohol comes from the United Arab Emirates (yeah Dubai!). Another 18 percent arrives by the tiny Persian Gulf island of Bahrain, via the causeway linking it to Saudi Arabia." A bottle of whisky (Johnnie Walker Black Label) can fetch $200. Expatriates making bootleg alcohol claim to earn $3000 per week.
For a full -down (and an entertaining way to kill 30 minutes on a Sunday afternoon, fix yourself a nice glass of Saudi Champagne and check out this very enlightening Google Answer: http://answers.google.com/answers/threadview/id/32856.html)
Posted by Matthew Mueller at 12:36 AM

We'll make sure there is plenty of this on hand to serve at your wedding reception.