Now that I have your attention, let's talk about something near and dear to all of our hearts over here - the second amendment. Not just useful for keeping the king of England off your back, guns are just as useful at destroying dinner plates, mugs, old glass bottles, and beer cans. 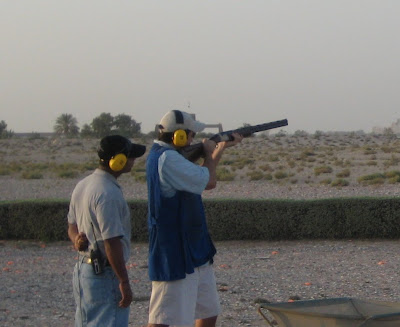 Over here in the Middle East, it's a bit tougher to just take your gun outside and start shooting (at least it's tough here in Dubai proper - I can't speak for 75 miles in any direction, though…). A few of us have been trying to shoot skeet for quite a well - but every time we've called since August, they've said "sorry, we don't have ammunition. Try again in a month". Turns out, that was just code for "you're not a member, and we're DEFINITELY not just gonna give you a gun". 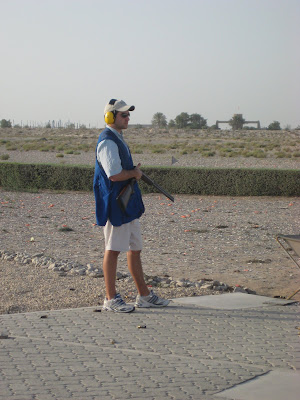 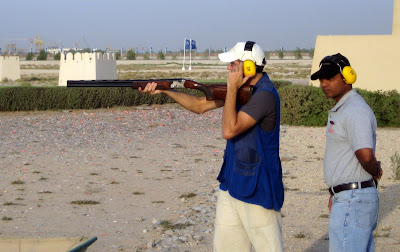 Turns out we could pretend we were members through our concierge, and we were able to get them to give us a box each for some practice last weekend. That's when we found out where all of the ammo in the middle east was going: that UAE Olympic shooting guy. He was practicing next to us, and he's FAST. Despite destroying orange lay dinner plates at an alarming rate, he has a pickup truck FOR HIS AMMUNITION. Then he has something like 15 guns, and an entourage that follows him around. Why a shotgun expert needs a 7-ft tall Russian bodyguard is totally beyond me, but that guy could have taken all for of us without even getting off his cell phone. 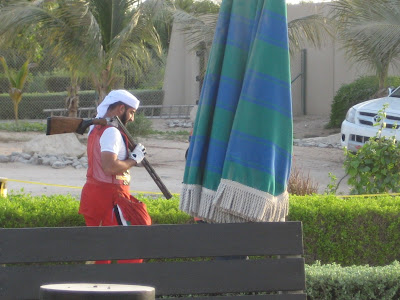 We'll be repeating the entire experience this coming weekend - our friends John and Lynze were nive enough to get Katie and I a "couples shooting" session. I suppose following it with couples massage would make us waaaay to Republican, but I think that's exactly what our friends had in mind. Those wiley Cheney-lovers...
Posted by Katie Shaver at 12:02 PM

Don't worry - Obama assures us that there will still be ammo, even after Cheney leaves office.