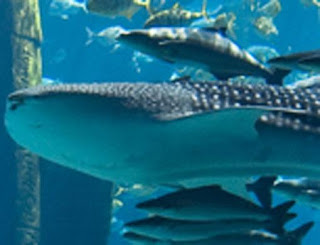 What's not important to anyone in Dubai today are the water slides at Atlantis. What IS important is that they're not releasing Sammy, the whale shark that they "temporarily" rescued off the coast a month ago. Sorry to everyone about leaving this little tidbit out.
Here's an excellent chronology from local media:
Step 1: The theft and PR blitz
Whale Shark "Rescued" and Taken to Atlantis Palm Aquarium - Dubai
http://www.gulfnews.com/nation/Environment/10243930.html
Step 2: The Truth Comes Out
http://dubaithoughts.blogspot.com/2008/10/whale-shark-pr.html
Step 3: The Facebook Groups Come out (now it's official!)
FREE THE PALM ATLANTIS WHALE SHARK!
http://www.facebook.com/group.php?gid=40963094168
Set The Whale Shark Free From The Atlantis Aquarium Dubai.http://www.facebook.com/group.php?gid=93869105312
Step 4: Full-on Outrage.
Cruel Beyond Belief
http://www.gulfnews.com/nation/general/10250751.html

As you can see in the picture, the "rescue" is paying for itself in tourism. And Atlantis couldn't be happier about the coverage.
The problem is, this morning a number of former employees of Atlantis came out and said that they had planned this all along. They hired fishing boats every morning for the past few months to go out and search for a whale shark to bring back to the tanks. Sammy, the shark they eventually found, is the same whale shark that has come into the Dubai marina and swum around a bit before leaving for the Maldives.
Apparently, the intention is never to release it - only to have a bigger and better aquarium than the Dubai Mall, opening this month. And no, they don't have a whale shark - not yet anyway.
Posted by Matthew Mueller at 3:04 PM

One other, even more devious possibility: the Atlantis Aquarium tank is really just the world's largest TV screen, linked to the Atlanta Aqaurium's whale shark tank. Atlantis/Atlanta - coincidence? I don't think so.