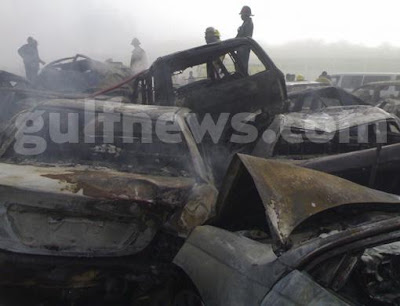 This is why I'm buying an SUV.
Yes, that's an actual accident, not a car-burning party organized by oil-rich citizens to clean out their dusty old car inventory. Just yesterday we were car shopping, trying to decide between an SUV (which we know we should really get) and a nice, svelte little city sports car. I knew deep down that it should be an SUV, but secretly still wanted a nice coupe or saloon car (look it up!). But wow - take a look at the pictures below, and you'll see that the people who survived the pile up were definitely in SUVs.
Ghantoot: At least six people have been killed after a series of horrific accidents on the Abu Dhabi-Dubai highway near Ghantoot on Tuesday morning. Police have said around 200 cars were involved in the crash, which happened in heavy fog, with 25 cars catching fire. Police also said that because of the bad weather helicopters were unable to begin airlifting the injured until 11.30am.
More photos available here: http://www.gulfnews.com/nation/Traffic_and_Transport/10196597.html
Posted by Matthew Mueller at 2:14 PM