Mohammad is not the only one with a birthday this time of year! My big day was on Friday, and lucky for me, in Dubai, that is the weekend! On Thursday night Matt took me out to dinner at the Cellar, the same place where he got us a table for Valentine's Day, he treated me to a great dinner and told me to 'rest up' for the birthday plans he had orchestrated for the next day.

The next morning while I packed a bag for the day. (I was instructed to bring a change of clothes in the event that we wouldn't return home all day...) Matt ran to grab breakfast, and returned not only with my tall latte, but with a mug with the name of each of the GCC (Gulf Coast Countries) emblazoned on the side. A total impulse buy that he tried to pass off as a birthday present! Now we have a geographically correct tea cabinet.

Matt had convinced me that we were going to have brunch at a restaurant in the Marina, but when we arrived he suggested that we take a stroll along the pier to look at the yachts that we docked. As we approached I saw a crew scurrying about on a yacht which was decorated with balloons everywhere. When we approached they said "you must be the birthday girl!" and invited us onboard, the El Girasol (sunflower in Spanish) was ours for the day! 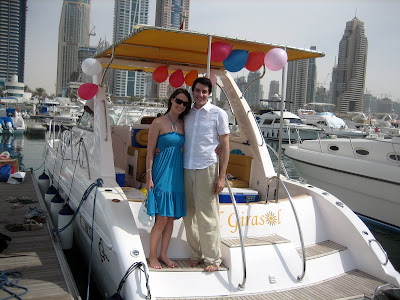 Matt had planned for us to take a tour of the Dubai coastline and watch the sunset over the ocean before we returned to shore. The crew suggested that they give us a quick tour of the boat before we shoved off, and as they opened the door to the cabin down below I hear "SURPRISE!" Eight of our friends had been hiding down there for over an hour waiting for our arrival! I was completely overwhelmed. 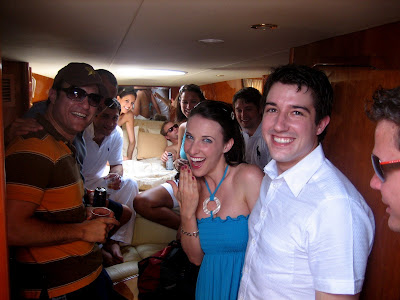 They had all pulled together to help out Matt and had packed three coolers with all essentials for the afternoon: wine, champagne, sandwiches, cheese, bread, and the all important chocolate cake! I had a great time on the boat, it was really nice to see Dubai from the water, we got a close up of all the new construction including the World and the Palm. Really cool! 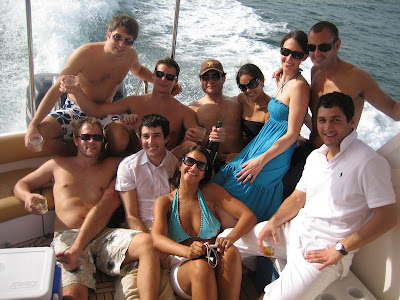 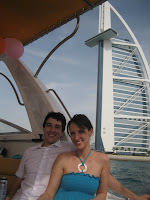 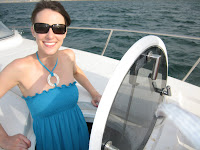 After dinner we retreated to an Capanna Nuova, an Italian restaurant at Dubai Marine (not to be confused with the Marina) and we had a delicious meal with our friends Emma, Dan, and Nick, while the other half of the group headed next door to the club, Boudoir (I suggest clicking on the link just to see the promotional video they have on their site - it's pretty funny), to secure us a table to dance the night away. We decided to forgo dessert at the restaurant so we could get to the lounge earlier to break out our dancing shoes! Not missing a beat, Matt made sure that there were strawberries and cream waiting at the table. A girl's gotta have sweets! The club was great, it had a really good blend of techno and R&B, which is really hard to find in Dubai. The night ended at about 3:30. Matt helped me hobble to the cab - strappy heels + four hours of dancing = major blisters, but more importantly it's the sign of a great night on the town! 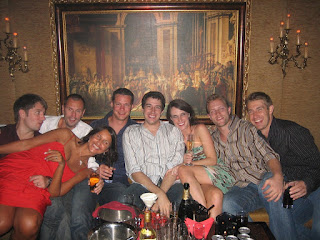 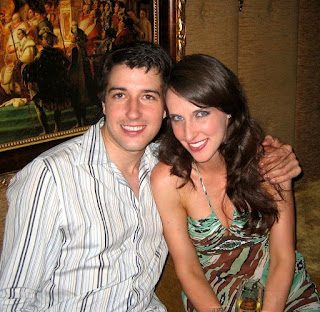 Posted by Matthew Mueller at 11:10 AM