Takayama: It Rhymes With Yo' Momma

You've heard of planes, trains and automobiles; but in Japan it is trains, trains, trains - and the occasional cable car.  By now we were really settling in to our train travel and enjoying grabbing lunch at the station and slipping into our seats just a few minutes before departure.  The freedom and convenience was great, and it really helped us see a lot of Japan - literally from our window!

Takayama is basically an alpine mountain town that is sleepy in the summer and booming in winter.  We didn't mind slowing down the pace just a bit to enjoy this area.  Now, we felt like we were really in the country side.  The city is best known for its inhabitants' expertise in carpentry. The town and its culture, as they exist today, took shape at the end of the 16th century, when the Kanamori clan built Takayama Castle. About a hundred years later the city came under the rule of the Tokugawa shogunate. However, the high altitude and separation from other areas of Japan kept the area fairly isolated, allowing Takayama to develop its own culture over about a 300-year period.

We stayed at another ryokan and it was a great, albeit, very traditional experience.  We dined at the inn for both nights and it was an experience!

Although we were a bit surprised when we were seated in the corner table on the first night - amongst no other foreigner, natch, and there was an American flag on our table.  I was delighted and Matt was mortified.  Normally I would see his point, but lets face it there was no way we were blending in here! 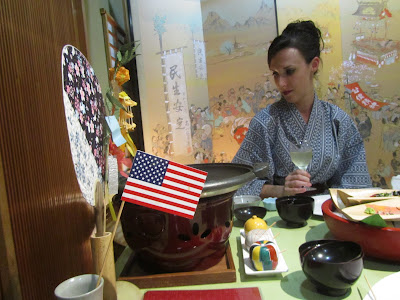 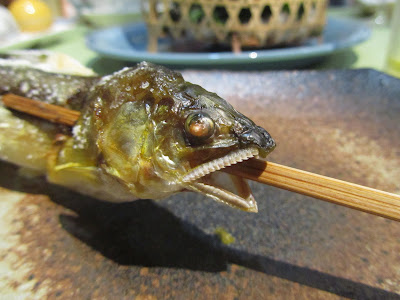 The appetizer...generally I don't like my food looking at me, but I was willing to let that slide.  I started gingerly picking at the meat from the sides of the fish (making a big mess) when Matt pointed out that everyone else had simply taken the whole thing down in two bites.  The whole thing?  When I asked our waitress, she confirmed that this is how it was meant to be eaten.  "But the teeth!" I said.  She looked at me like I was the crazy one, shrugged her shoulders and said, "calcium." 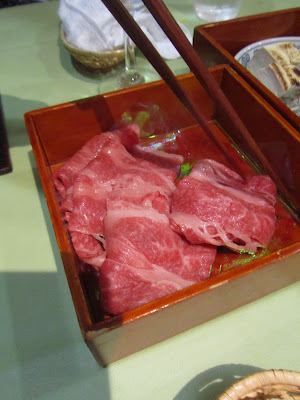 And in this corner weighing in at 8 oz, is the most delicious, stupendous, fabulous meat you've ever had in your life, Hhhhhhhhhhhhida Beeeeeeeef!  Hida beef (my mouth is watering as a write this), is the most amazing beef I've had in my life.  You've heard of Kobe beef?  Yeah, that's the stuff they are willing to part with for export.  Hida is the stuff that never makes it out of Japan - and it's an experience.  The cattle are massaged, and fed beer and sake in their feed, to get the optimal aka insane amount of marbling. 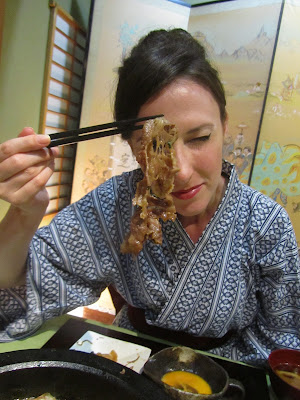 We had some of the beef in sukiyaki, which is kind of a Japanese pot roast.  It actually looks like Swiss cheese when the fat cooks off. Such a gem!  This is a little Mexican restaurant in town, and as soon as we saw it we had to try it.  Alas, it was closed for 2 days, and on our last night there we saw it was open and popped in.  It was just us and the owner/chef, and he was adorable.  We really lucked out that he spoke a little English and he told us that he has run the restaurant on his own for 16 years, and that he closed for two days to take his son to college.  We asked, "Why Mexican in Japan?"  And he said, "I was there twice and I thought the food looked easy to make."  Fair enough!  He proudly showed us his mention in the Mexican Business Council's Japan guide to restaurants, but the proof was in the pudding.  The guac was stellar.

Sometimes when we take a break from eating we do some site seeing, who knew?  This is a shot of the Yoshijima-ke, it is an extremely famous house in the architectural world.  It is known for it's traditional style: large rooms separated by paper screens, a central garden, all wood construction (no nails, they rust!) and minimalism.  Here the teapot is suspended over the indoor fire pit for cooking. 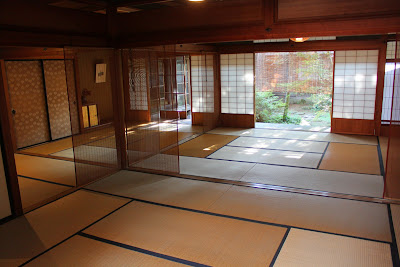 I really fell in love with the Japanese architecture.  This is a view into the central garden from the  living area.  Most Japanese living in this style have a huge storage facility behind their house that keeps a large collection of furniture and art work which is changed for its utility, the occasion and the season.  They don't have a "bedroom" or a "living room" - these areas could switch around daily.  According to them a room is defined by the objects in it, it doesn't define itself.  I found that a really neat concept. 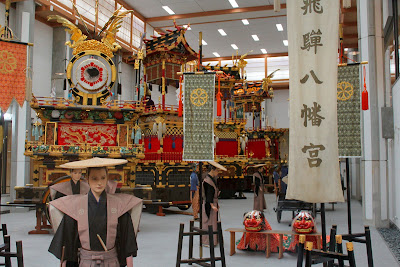 These are some of the 23 yatai, or floats that are used i the annual Takayama Matsuri parade.  They were build in the 17th century and can take up to 50 people to operate.  The original lacquer and gold still look brilliant. 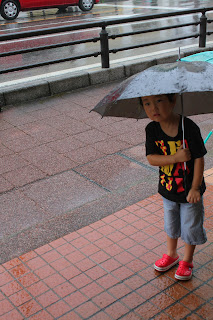 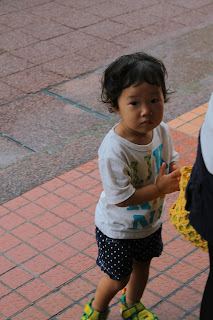 This is a little art piece I call: Japanese kids staring at me in the rain.  A flash thunderstorm started and we had to take shelter under an awning.

I felt like I was on display!  These cutie pies clearly haven't seen many white people in the flesh and they all stared at us.  It was like being in a zoo! 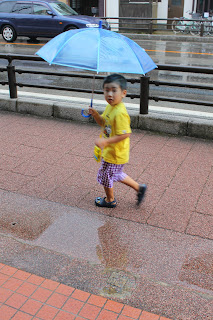 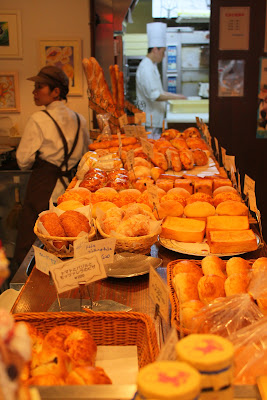 Yeah, like I said, they are afraid to tackle French food.  Here's the neighborhood Boulangerie. 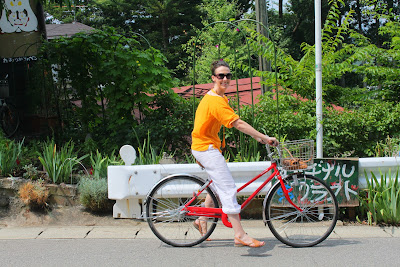 Nothing like remembering how to use a ten speed!  We rented a few bikes and headed toward the Hida-No-Sato, which is a traditional village with preserved old houses.

But we got distracted along the way!  The only cooler than a late summer beer tasting... 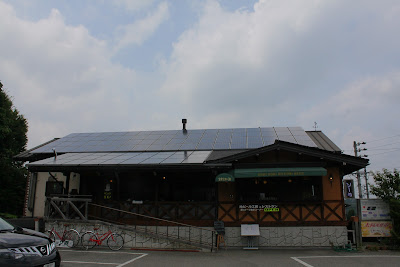 ...is that is comes from a 100% solar powered micro-brewery!

We burned off some energy watching the sun set on the Sakurayam Hachiman-gu shrine.  It is dedicated to the protection of Takayama.
Here's to the protection indeed!  It needs to still be on the map when I go back for the beef!
Posted by Katie Shaver at 10:16 PM

Fascinating look at a relatively untouched part of Japan. You clearly got a good taste of traditional culture, craft, and architecture.

'Don't know about that tradition of eating fish teeth, though.

Very nice and funny. Enjoyed reading! Also shared your post with other Takayama fans. Your hida vs kobe beef part especially haha very nice. Thanks for a positive review!