Fuji: You Know the Film and the Apples, Now Meet the Mountain.

We traded in the city lights of Tokyo for the great heights of Mt. Fugi.  The area at the foot of Mt. Fugi and Lake Ashi is absolutely beautiful.  It's lush and green with flowering plants and babbling brooks.  Its one of the most idyllic places in Japan and it's renown for its beauty.

The area surrounding the Mountain is known as Hakone, and for the day you can take a tour around the whole area via five modes of transportation: cog railway, cable car, boat, bus, and rope way.  We were hoping for a peaceful day hoping around the sites...but, you might emember that Obon holiday I mentioned in the last post - well this day happened to be the official public holiday,which meant that everyone and their brother had traveled from Tokyo to Hakone for the day.  Not, really the romantic day we had planned - unless you want to share a cozy train ride with a hundred strangers. 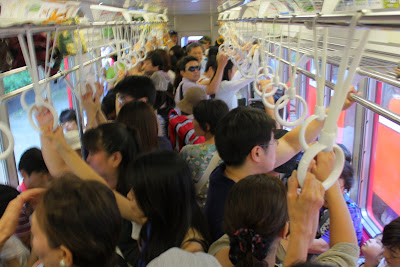 This is how the day started, a little close for comfort...but one hour later we were on this... 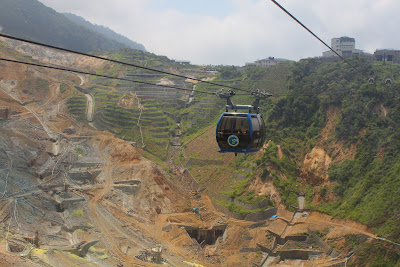 ...a little bit more breathing room in the cable car.  We are soaring over the back side of the valley which is steaming with sulfur vapor from the ground below.  Mt. Fuji is known for her natural hot springs which the locals build bathhouses called onsens over, so they can soak up the steam. 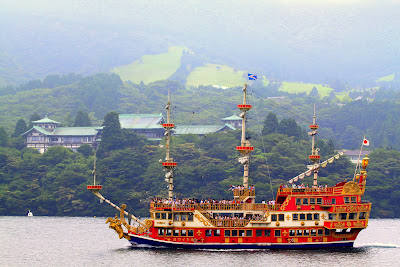 The Black (red) Pearl?  The boats that traverse Lake Ashi are all built like old pirate ships.  They are quite the spectacle. 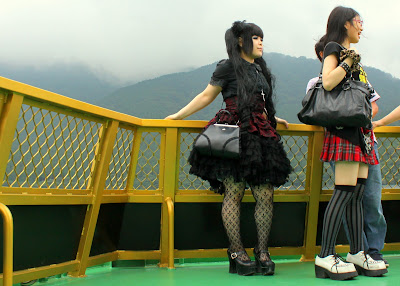 Not what you would wear on a boat?  Looks like the skirt could be used as a flotation device!  These are cosplay girls (short for costume play).  They dress up like their favorite anime or comic book characters and try to stay in character throughout the day.  It's a huge sub-culture in Japan.  It was explained to me that often these young people feel like they have dull lives - long commutes, boring office jobs - so they like to take reality breaks and its exhilarating for them to play someone else for awhile. 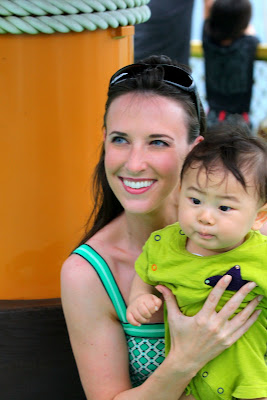 This was my prop for the day.  On the boat this woman handed me her baby and started snapping photos of the rare "white lady".  No joke.  Actually joke was on me as I was hoping to keep him - cutie pie! 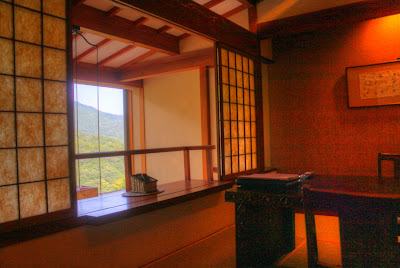 After a full day of sightseeing, we were delighted to check into our first ryokan, which is a traditional Japanese guest house.  Shoes off, clothes provided, dinner at 7 in your room - it was a lot to take on, especially with a hefty language barrier!  The Hakone Ginyu ryokan was stunning.  This the second floor of our room which was done is all lacquered woods and paper screens.  Now I really felt like I was in old Japan! 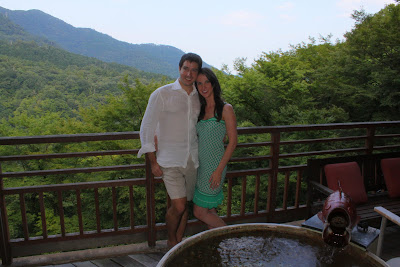 The view from the balcony was stunning... 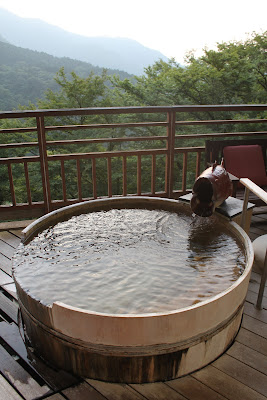 ...but the bathtub was the real star.  Mineral water strait from the hot springs pours right out of fish's mouth.  I'm sold!  As an aside, this was the only shower, so we really got 'back to nature' when it was bath time.  Can't get much closer! 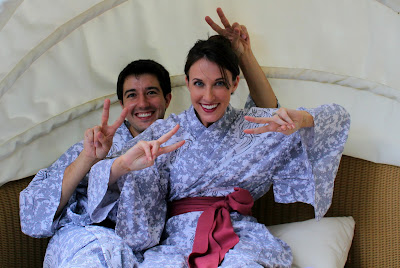 We were promptly encouraged to change into our yukata which is a type of causal dress for the Japanese (don't call it a bathrobe - they don't find it funny).  After changing into our garb we couldn't help but bust out a few Japanese peace signs - yeah, now I can say from experience they do this in about 80% of every picture they take. 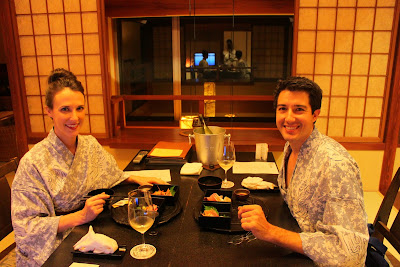 We were served dinner seated on the floor, naturally, and were treated to the chef's specials.  A tasting menu with 12 courses.  Just like Dasher, Dancer and Prancer, I can't remember all of them, it was just too overwhelming!  Thank goodness we are people who take pictures of their food...yep, those people. 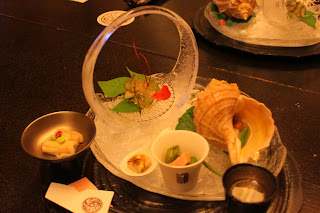 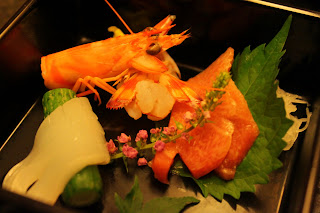 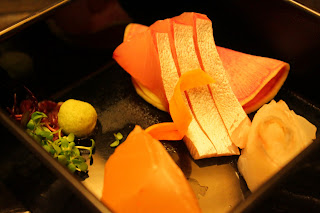 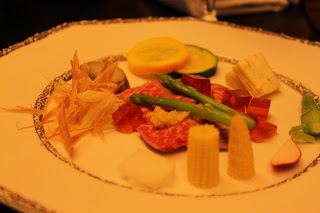 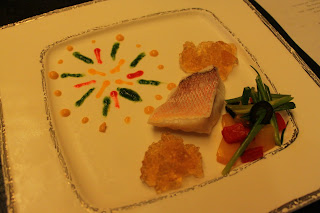 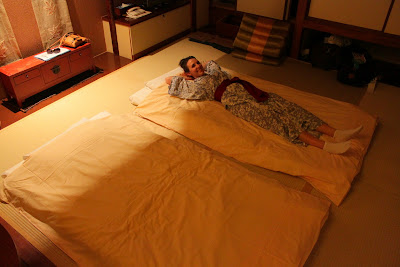 I have a little bit of a Princess and the Pea problem, so I was a little worried about the traditional sleeping arrangements.  We slept on futons on the tatami mat floor.  They were incredibly comfortable and we both slept great! 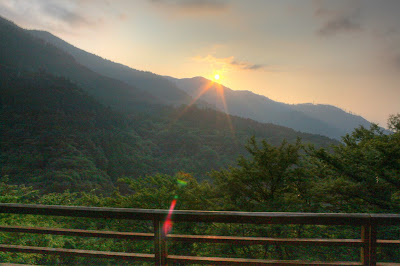 Who needs to sleep in when you get to wake up to this? 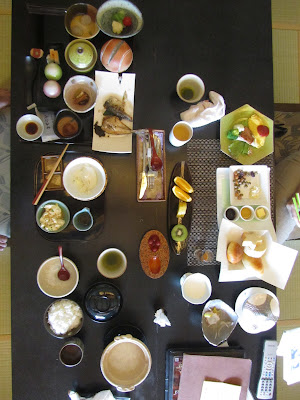 A birds-eye view of our breakfast table the next morning.  There are almost forty plates on this table.  Each one with an individually prepared 'taste' of something for breakfast.  I ate granola with chopsticks and Matt braved some morning squid!
Now that we have our energy - time for Takayama!
Posted by Katie Shaver at 10:41 PM

Thanks for making us feel just like we were there with you. 'Loved the pirate ship, the cosplay girls, and the ryokan.

Yesterday, we visited the orchard where Matt and Chris used to pick apples. The Fuji's were the best!