Kanazawa: The Marsh of Gold

The name Kanazawa literally means 'marsh of gold' and that name certainly held true as this wonderful city was a treasure trove of interesting things to see, do and eat!  Situated on the coast of the Sea of Japan and bordered by the Japan Alps, this busting city is home to half a million people who are able to enjoy a city full of life since the early days.  After 1583 the Maeda (you might not know Maeda but you might know their chief retainers - Honda) clan took power over the province and it's bountiful rice harvests made it a pretty rich area, today it retains the best remains of the original samurai district and geisha tea houses.  The city was also spared in WWII leaving all the good stuff untouched - lucky us! 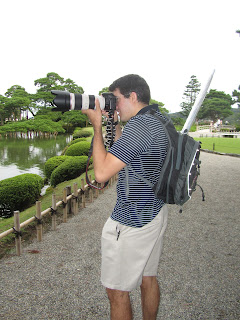 The age old question: can you be a 'Japanese tourist' in Japan? 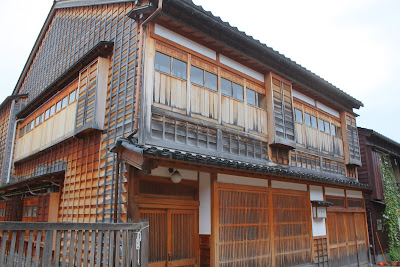 Walking through the Higashi Chaya-Gai district is like stepping back in time.  Many original tea houses dot the cobblestone lanes.  This is a famous geisha house name Shima. 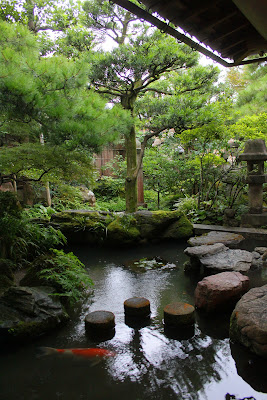 The Normura samurai house is one of the most impressive ones left standing.  Samurai houses share a similar basic pattern: a single-floored residence, usually fairly square or rectangular in plan, surrounded by a garden – both the vegetable and the decorative kinds. The roof was gabled, and faced the road.  This was the most beautiful central garden we saw on the entire trip. 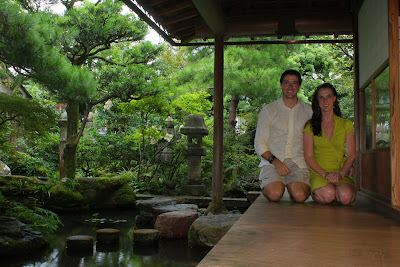 Here you can see that the house is built to accommodate a view into the garden from almost every angle.  People also often moved around on the walk ways outside of the rooms and then entered, rather that traveling through the house. 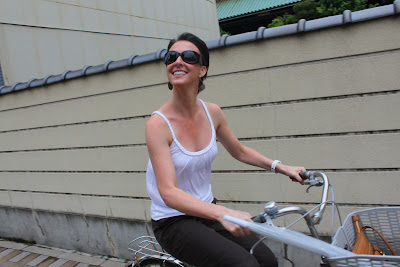 Once again Japan gets me on a bike - and I couldn't be happier!  I'm also on my way to one of the top rated Japanese gardens in the world! 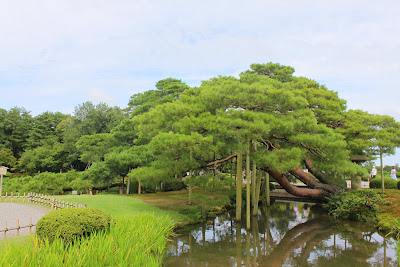 Kenroku-en, means the Six Attributes garden.  The six Chinese attributes for perfection are: seclusion, spaciousness, artificiality, antiquity, abundant water and board views.  They certainly hit this one on the head!  The garden is an absolutely stunning site, which each detail hand picked by it's creators.  It started in 1676 as the garden of an outside villa from the Kanazawa castle, but the liked it so much they annexed it! 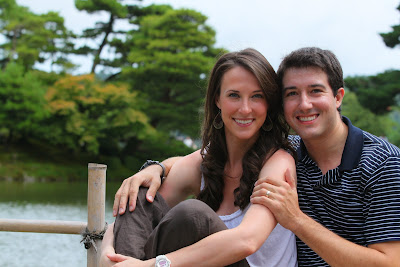 The garden has many claims to famous but one of it's proudest is that is has the oldest working foundtain in Japan, operated by natural water pressure.  (And a lot great photo ops, naturally!) 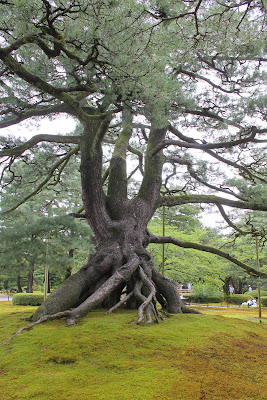 Many of the old trees have taken on a life of their own, twisting and turning over the years - the effect is really spectacular. 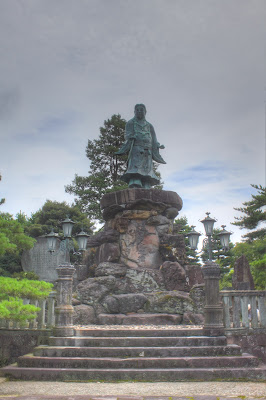 Prince Yamatotakeru was a Japanese legendary prince of the Yamato dynasty, son of Keikō of Yamato, a legendary monarch who is traditionally counted as the 12th Emperor of Japan. The tragic tale of this impressive figure is told in the Japanese chronicles Kojiki and Nihon Shoki. 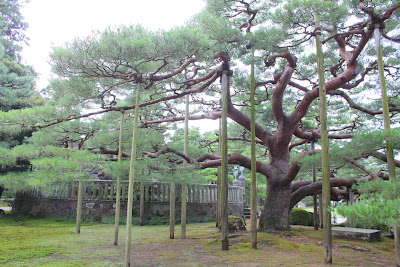 The Japanese know how to lend a hand, er, stake.  Just when the trees get too big for their britches they build them supports to hold up the weight.  Isn't it a little ironic to pop up a tree with another tree? 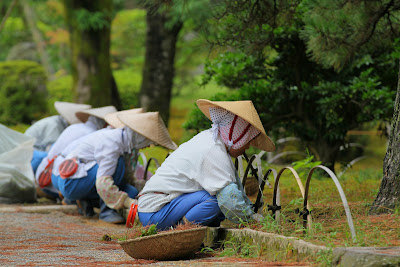 These gardens don't maintain themselves.  They've got a whole dedicated troop tending the yards - in orderly fashion of course.
The 21st Century Museum of Contemporary Art is really a must see.  There are so many neat exhibits that are both entertaining and provoking. 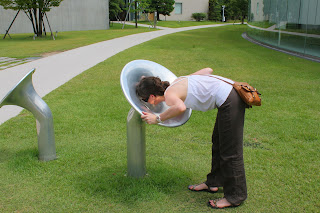 The grounds of the art museum have these trumpets that come up from the ground that have a 'match' somewhere else.  The idea is to facilitate communication across boundaries. 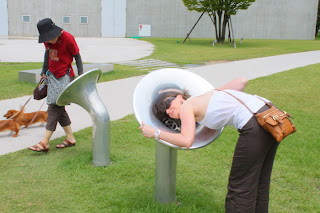 I tried to not be offended when no one talked back! 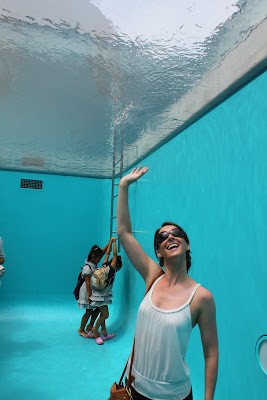 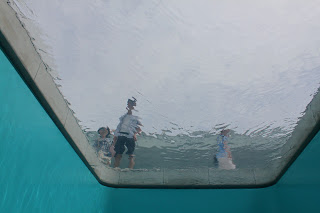 There was a great art piece called The Swimming Pool by Leandro Erlich.  When seen from the deck, the pool appears to be filled with deep, shimmering water. In fact, however, a layer of water only 10 centimeters deep is suspended over transparent glass. Below the glass is an empty space with aquamarine walls that viewers can enter.  You can look at the people from the bottom of the pool and they can see you from below.  It's really a bit mind bending. 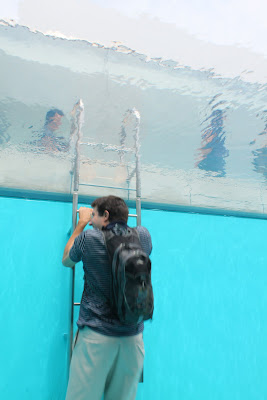 The optical illusion is compelling.  Doesn't it look like he could climb out? 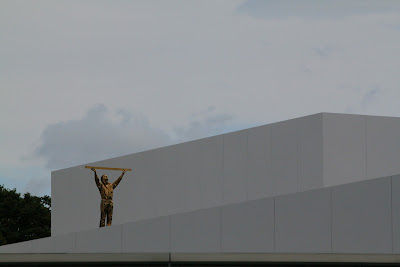 I was also really taken by this sculpture that stands on the museum's roof.  The Man Who Measures the Clouds by Jon Fabre.  For some reason it really touched me, and made me feel very optimistic :) 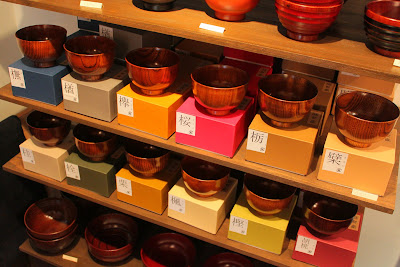 Kanazawa is known for it's lacquer and wood working, and it took all my strength to leave without these hand carved rice bowls.  The richness and color of the wood was really beautiful.  The Japanese tend to think that everything should look harmonious and lovely - which should explain how somehow I became obsessed with wood bowls during this souvenir stop, everything just looks so great together. 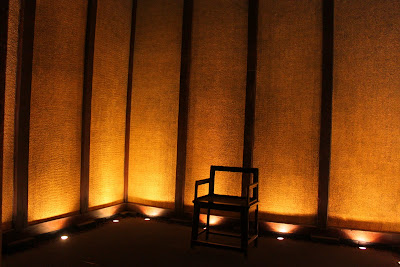 Not called the 'golden marsh' for no reason, Kanazawa produces 99% of Japan's gold leaf.  This merchant dedicated to wallpaper a tea room with it - no biggie. 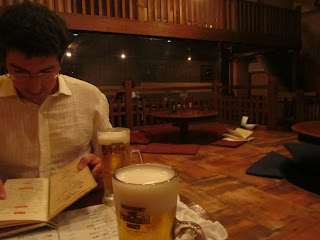 After a hard day's site seeing we found a friendly local izakaya (Japanese pub) to practice our pantomiming skills at - no English, of course.  The bonus was the option of floor and regular seating in one.  If you look at the table over Matt's shoulder you'll see mats on the floor, but your notice they are sitting above a cut out around the table, so you can actually sit with your legs extended - like a Western table - but still look like you are sitting on the floor.  I want one!
Posted by Katie Shaver at 10:35 PM

'Glad you took the time to take in this gorgeous place, especially Kenroku-en.

Does Matt remember the sushi restaurant in Charlottesville that had tables with the cutouts below just like at the izakaya you visited?