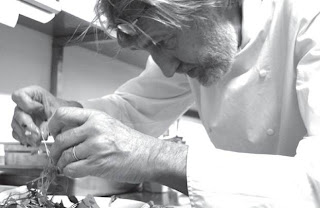 We were dining at Refletts earlier this year, and got a bit carried away.  Katie and I went to town on the food, wine - it was all so good!  Unfortunately, our stomachs were bigger than our wallets.  The manager Dennis gave us two choices - we could go to jail or work off our (substantial) debt.

So, being world reknowned chefs, we decided it was a win-win - Pierre could really use our help.  We put on our Saturday morning finest, and went into the kitchen to sweat it out.  Here's a picture of me telling everyone what a tomato is (nobody had ever seen one): 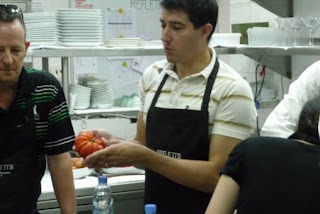 Katie's no slouch, either - here she is telling one of the soux chefs that you could chop mushrooms - he was blown away.  "This is so amazing - now that I know they can be chopped, the possibilities are endless!" he was heard saying. 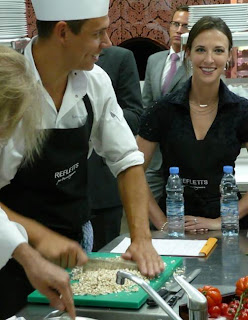 Clearly, it was a big success - we spent all day cooking, cleaning, tasting, and generally impressing everyone with our skills.  A crowd soon gathered, and Pierre challenged us to a duel.  Let's just say that it was close - his 45-ingredient fruits de mer "LA MÉDITERRANÉE" narrowly edged out my "Matt's Famous Garlic Bread."  I maintain that he cheated - the saddle of rabbit he added at the end definitely didn't come from the ocean.  However, I'm a gracious loser - see his recipe at the end (I don't give away my garlic bread secrets to just anybody!). 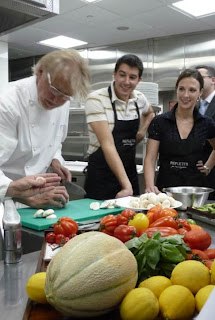 Here's a photo with the two head chefs on the left, Pierre, and a few of the other people working off their debt that day: 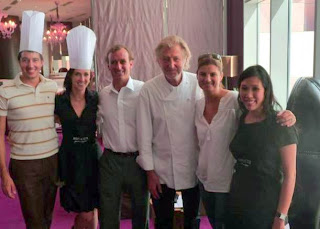 For those of you who believe a world-renowned chef is better than a guy in paper hat that can make a wicked batch of popcorn, here's one of Pierre Gagnaire's recipes (and don't forget to check out his website at http://www.pierre-gagnaire.com): 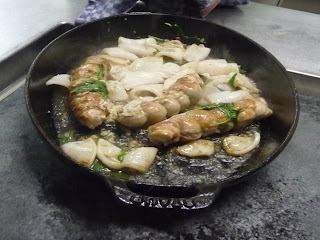 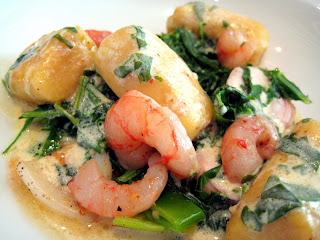 Plating:
Put the rocket salad in the center of the plate, place the mixture of rabbit, cuttlefish on top and then the gambas. Pour a little bit of the cream of the rocket on top of the dish.
Posted by Matthew Mueller at 5:02 PM

Great story! Now you've got me looking for Espelette pepper.

And we'll be sure to lay in a supply of garlic for your next visit.