The Millennium Falcon has landed in Dubai! Sort of. This city has been host to a lot visitors over the years but I can't say Jabba the Hut or storm troopers have ever found a home here before! While I often wish we lived in Cloud City (we rarely have them here...) it is pretty shocking how natural these images look!

Cedric Delsaux, a French photographer who has made a name for himself juxtaposing iconic images from the classic Star Wars films into locations on earth, has turned to Dubai for his most recent set of images.

In Delsaux's images, the Millennium Falcon can be found parked in a vast construction project in the Ducai's downtown (our neighborhood!), exhausted droids are seen hanging out around a clapped-out old Buick and terrifying At-At armored transports stride over freeways.

Click on the image below to see the whole (awesome) slide show and article. 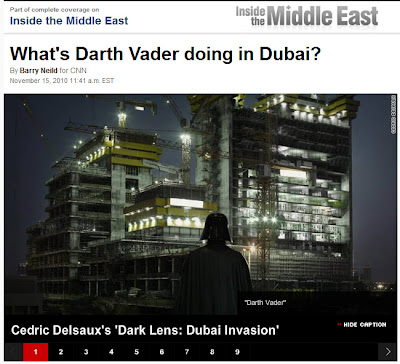