You can see my dilemma - on one hand, my mother told me she'd never allow me to fly a plane (I think that pile of fabric on the right qualifies). On the other, I really, really wanted to jump off the cliff by running down that ramp on the left. Into the clouds. As the first people to paraglide off Neuschwanstein after 6 weeks of rain. Ahem. It's a parachute, and a chair, and some REALLY thin rope. What could go wrong? 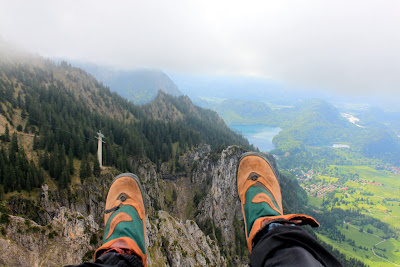 Well, I ran down the ramp after all, and was rewarded by feeling what it's like to be a bird. A bird with ugly shoes (they made me wear them), but a bird nonetheless. 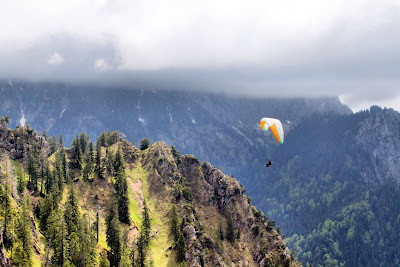 And the views of the alps, with the castles below, from a flying chair at 5,000 ft were just amazing. The clouds finally broke as we flew down threw them, and I was able to snap this vista (mental note: never trying changing a lens while paragliding)

Afterwards, a fellow glider had fun by landing on our sail, but don't worry -we survived... 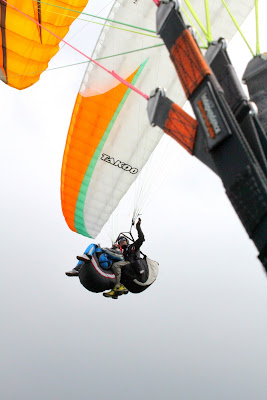 ...right up until we started doing inverted loops, and other crazy maneuvers that you should never approach without a 45-year old instructor with a pony tail named "Tiger" (mine was, fortunately). This picture was taken while my chair was ABOVE the parachute. So was what I had for lunch, unfortunately! 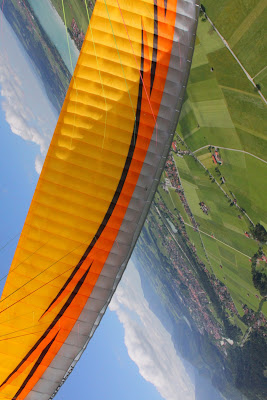 Posted by Matthew Mueller at 7:47 PM