There are very few times in life I find myself winding up a fist-pump and shouting "you go girl", but if I'm going to embarrass myself in a fit of overwhelming feminism this is a good reason to do so.

As most people know the role of women in the family, workplace and society as a whole in certain Islamic nations can be very limited. Saudi Arabia (ps. if you want to sound like you know the region just say 'Saudi' the whole 'Arabia' part is very American - no one else says it) isn't known for topping the lists for a great human rights track record or granting civil liberties and basic freedoms to women. Just one of the MANY things a woman can't do in Saudi is drive. The only time a woman can get anywhere in a car is when she is accompanied by a male relative, because if she were to take a regular taxi she would clearly be 'alone' with a male non-relative. 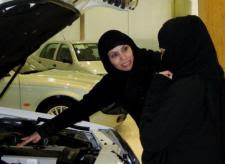 A group of brave and ingenious women who are fighting for their rights in Saudi have come up with a solution/treat. Either let us drive or we will breastfeed taxi drivers for the right to drive with them.

Seem like an odd solution? Not by the Koran's standards. It is stated in the Holy Book that once a woman has breastfed an infant (whether kin or not) that baby is now a 'daughter' or 'son' of that woman. Many believe that the practice was developed because during nomadic times mothers would often share the responsibility of feeding infants. By then declaring that a certain group of infants were all now 'related' you discouraged them from marrying and therefore they would need to seek out mates in other tribes which was healthy both biologically and for their trading partnerships.

These woman are threatening to turn taxi drivers into their 'sons' so they can then legally hitch a ride.

The most disturbing part? A renowned religious scholar and senior advisor to the Saudi king issued a fatwa saying "ok, that's reasonable." Rather than grant women the right to drive he has gone on record to say that this would be an acceptable way for woman to 'get around' the ban on driving and that it has the government's support.

The women say they aren't bluffing - and they were commence with a campaign. What's worse is now they are receiving backlash from the community attacking their modesty and values despite that they are merely making good on what their scholars have told them. Unbelievable. Stay strong girls!
Posted by Katie Shaver at 1:10 PM