Mama Said Knock You Out 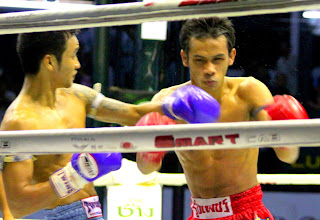 Thai boxing isn't a sport for slouches. While the 9, 10, and 11 year olds were really fun to watch, later in the evening came the Jean Claude look-alikes. Halfway through, we even got to see a match straight out of Mike Tyson. The tall, skinny guy was dancing all over the ring, while the shorter guy was just standing there smiling. A few big swings were met with nothing but air, but in round 4, BAM - right in the kisser. 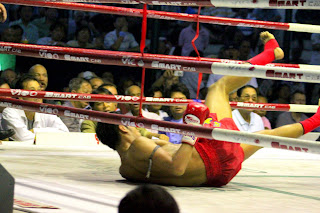 The tall fighter stumbled, then hit the ground. 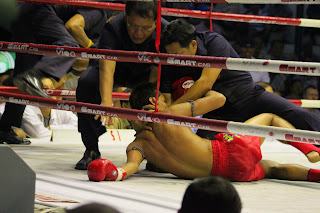 After a couple of tries to get up, the trainers were on him and brought him out in a stretcher. That put a damper on my plans to try my hands (and feet!) at Thai boxing for while!

Posted by Matthew Mueller at 10:23 PM

OTOH, I would have thought all the head butts you've sustained recently from various animals would have you in shape for this sport.