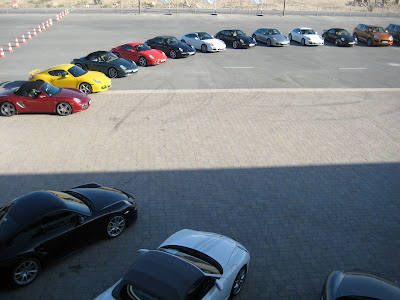 Many of you might remember from our last post about the Nutella party, that I was engaged in a competitive silent auction and I had my eye on just one prize. After a triumphant win, I finally got to enjoy my spoils on Wednesday at The Porsche World Tour "day at the track". It consisted of four different driving sessions and a healthy dose of lame German humor. A slew of drivers and engineers are flown around the world by Porsche, "spreading the Porsche virus" everywhere they go. Other notable mentions: "You should buy a Porsche for your wife, your girlfriend, or perhaps both", "You call that braking? That was more like a coffee break", and "That was your one warning. If you fail to control the car again, you're done driving for the day". (Maybe I should've kept the 911 on the track). 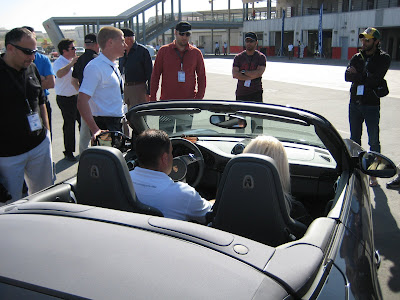 We did four courses, most of which were a bit of a sales pitch, but all fun: Slalom with a Cayman and Boxter, Lap Handling with 911's, Off-road with Cayenne's, and "Braking", which really meant flooring it and then braking, in 911 Turbos. Most of the time we had an instructor with us, but for the track laps, I had a very, very scared teenage Porsche owner from Umm Al Quainn named Hassan. His video commentary is still uploading to YouTube - stay tuned! 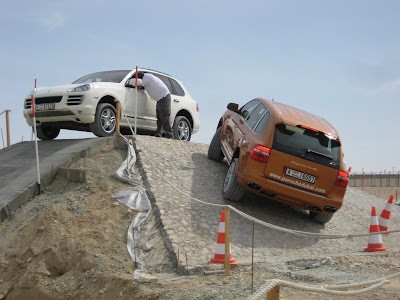 Again, a great way to spend a day driving around the track, but I can't possibly emphasize how German it was. EVERYTHING was about the features. Our instructor spent 15 minutes explaining and demonstrating the newest 911 "supreme feature package sets", which sounded a bit like "super happy fun cars". Ya. Names like "Launch Control", "Porsche Doppelkupplung", and "Brakes". All equally useless and expensive. 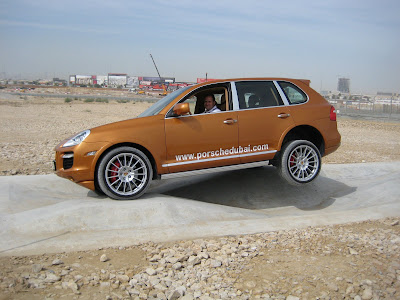 And what did we learn from a day with high performance German automobiles? Two things, actually. One, you never, EVER go into a turn too fast in a Porsche and then hit the gas - unless you're driving the Cayenne SUV and are having fun skidding a family car around the track. Second, German engineers are awesome - but I wonder how long those things last in the sand.
Posted by Matthew Mueller at 3:30 PM

Since 1/4 of your blood came straight from Stuttgart, it's no surprise you enjoyed these cars.