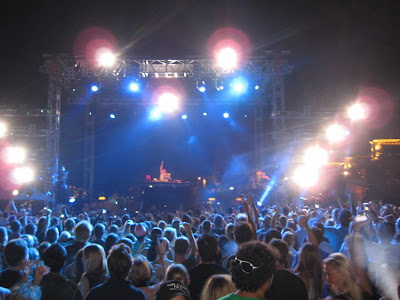 As many of your might know, I'm not a number one fan of techno, house, electronica, trance, etc. (Apparently there is even something called drum and bass?) So, when we found out that Fat Boy Slim was coming to town I wasn't sure if I was really keen on getting tickets, however Matt reminded me that Mr. Slim plays a lot of pop music and he played me a little "Praise You" and "Weapon of Choice" to sway my decision. And really, how many times do you get to just swing by a Fat Boy Slim concert? Ok, so I was going to go check it out. The venue was outdoors on the shores of the Arabian Gulf and we had some really great weather (just before a sand storm hit). We were able to get pretty close to the stage to enjoy the show. Fat Boy Slim came out right on time at 9:00pm and every one's first reaction was that he is older than any of us thought! We had never really seen him before in his music videos so we didn't know that he is almost 50. The other odd thing is that this was unlike any other ‘concert’ I’ve ever seen. The performance was just this guy, his turntables, and some bizarre art house-esque images on a big screen. 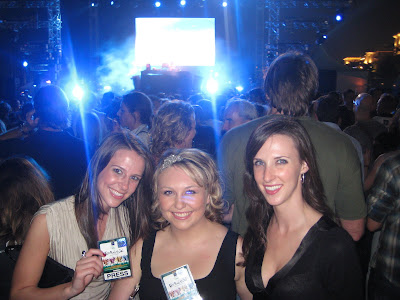 But the guy was rocking it, dancing around on stage, throwing bananas at the crowd, and pulling all sorts of antics. You can check out a video of him saying "hello" to the crowd below. The music was pretty good (remember my bias) but the only thing that I can really remember was the bass - the bone shaking, mind numbing, feel in your chest kind of bass. After adapting to jumping up and down with the crowd, which I still challenge as a valid form of dance, I had two thoughts. 1) I was thirsty and 2) gosh, I wish I had a visor to block my eyes from all these crazy lasers! And that, Matt tells me, means I'm just now discovering what a generation of ravers figured out along time ago. I'm glad to know that even though I am late I can still show up to the party! 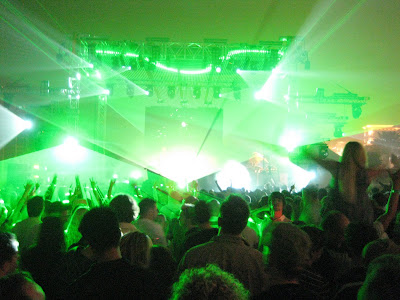